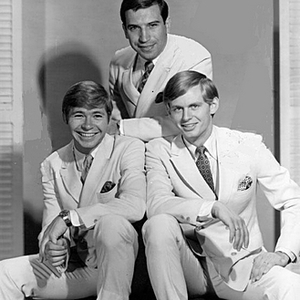 The Chad Mitchell Trio was a popular folk music group during the 1960s. The group became known for their willingness to perform both serious and satirical songs that criticized current events and news-makers, compared to the typical 'folk music' groups of their time. The original group was formed by Gonzaga University students and Glee Club members William Chad Mitchell (from Spokane, Washington); Mike Kobluk (from Trail, British Columbia, Canada); and Mike Pugh (from Pasco, Washington). They were encouraged by Spokane, Washington Roman Catholic priest Reinard W.

The original group was formed by Gonzaga University students and Glee Club members William Chad Mitchell (from Spokane, Washington); Mike Kobluk (from Trail, British Columbia, Canada); and Mike Pugh (from Pasco, Washington). They were encouraged by Spokane, Washington Roman Catholic priest Reinard W. Beaver, who invited the three to travel with him to New York City in the summer of 1959 and to try performing in the burgeoning folk-music scene. Unlike many fellow folk-music groups, none of the Trio's members played instruments.

The key people that helped the Trio get going were musical arranger Milton Okun and star performer/singer Harry Belafonte. Okun provided a professional polish to their performing skills, which helped them gain both a key booking at New York City's Blue Angel club and radio appearances with Arthur Godfrey and television appearances with Pat Boone. Belafonte had them appear as back-up singers, with a small featured spotlight, in his May 1960 Carnegie Hall concert, and signed them to his Belafonte Enterprises management firm.

In the summer of 1960, Pugh left the group to return to college. After auditioning over 150 singers, Joe Frazier (from Lebanon, Pennsylvania; not the heavyweight champion boxer) was chosen to replace Pugh.

After releasing mostly conventional folk songs, the Trio unleashed the then-daring satire "The John Birch Society" (Fighting for the right to fight/The right fight for the Right!), which established their ability to perform more controversial material. Their departure from Belafonte Enterprises in 1962, followed by their move to Mercury Records in 1963, gave them more freedom to add aggressively political songs to their body of folk, love, and world-music songs.

Mitchell left the Trio in 1965 to embark on a solo singing career. Another audition process replaced him with young singer/songwriter named John Denver. The group retained the well-known Mitchell Trio name, with Denver writing some of the group's songs, as Mitchell had done.

Frazier's departure from the Trio in 1966 brought on replacement David Boise. After a final live release, Kobluk left; Denver and Boise replaced Kobluk with Michael Johnson (who would later go on as a solo artist) and, because of contractual requirements that prohibited using the "Mitchell" name after the last original member left, became Denver, Boise and Johnson. Soon, however, the group disbanded.

Mike Kobluk, Joe Frazier and David Boise later left the music industry, Chad Mitchell released a number of solo albums before retiring from music, and Denver's time with the Trio became the springboard to his solo career (he died in October of 1997). Michael Johnson lives in Nashville and continues to record.

The Mitchell/Kobluk/Frazier trio and John Denver reunited in 1987 for several concerts, some broadcast on PBS. These are the only recordings of all four members singing together.

The Mitchell/Kobluk/Frazier trio reunited again in 2005 for a short program as part of a concert also featuring Tom Paxton and The Kingston Trio's current lineup in Minneapolis, Minnesota.

Other featured musicians for the Trio through the years included:

The Best Of The Chad Mitchell Trio

That's the Way It's Gonna Be