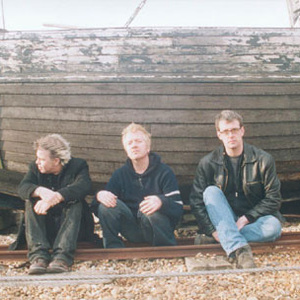 ?But when you wake up from a dream there's no getting back there? --- the poignancy of passing time, the magic dissolving, is a recurring theme of folk noiristes SONGDOG. Lives fade away like a half-heard whisper behind the curtain in the cinema on a Saturday afternoon, love disappears in a taxi on a rainy night, they're ?growing old in a snakepit?, yet the spirit remains defiant in their uncompromising, explicit lyricism.

Songdog are Lyndon Morgans and Karl Woodward (both from Blackwood, Wales) and Dave Paterson (originally from Dundee), whose delicate, stripped-down instrumentation surrounds intricate stories of life, love and loss.

Signed to One Little Indian, Songdog's albums, including ?A Life Eroding' (2010), 'A Wretched Sinner's Song' (2008) and 'The Time Of Summer Lightning' (2005), have received press reviews and airplay on Jonathan Ross and Janice Long on BBC Radio 2, Gideon Coe on BBC 6Music and John Kennedy on XFM shows amongst others. Their cover of Dylan's 'Desolation Row' was commissioned specially for Uncut's 100th birthday issue covermount.

Fans include Robert Wyatt, Jack Douglas (producer of John Lennon's Double Fantasy) and Bruce Springsteen, who used their track 'Days of Armageddon' for "walk in music" on his European tour and personally requested a copy of 'A Wretched Sinner's Song'. Live dates include shows at the Bloomsbury Theatre (supporting Martin Rossiter, ex-Gene), Kings Place, the Borderline, Roundhouse Studio, Bush Hall, Union Chapel, ICA and Spitz, supporting Joan As Police Woman at the Queen Elizabeth Hall, appearances at the Port Eliot, Analog, Wireless, Guilfest, TDK Cross Central and Secret Garden festivals and supporting the Go-Betweens on their last UK tour. They have also appeared at international festivals in Japan, Canada, Spain, Sweden and Russia.

Influences: Lyndon reveres Leonard Cohen, James Joyce, Joni Mitchell, Samuel Beckett, Tom Waits, Marcel Proust, Bob Dylan and Emile Cioran. Plus Roy Orbison and Franz Kafka, the Beatles, Bruce Springsteen and Baudelaire. For Lyndon, if it's not about poetry (the shorthand of the heart) and great tunes it's probably just a career move. Sure, poetry can encompass anything from ?The Waste Land? to ?Long Tall Sally? but just so long as it's there! In earlier bands Lyndon used to yelp his stuff in front of Marshall-stacks and big bass-bins, but with Songdog he changed tack and sold his gold-top Les Paul for a Martin. So there's as much attitude in his songs as ever, only now it's murmured sotto voce.

Lyndon's non-musical writing includes 'Water Music' (for which he won the Verity Bargate Award for Best New Play), 'Jitterbugger: a cartoon for the stage', a French monologue, 'Conte de F?es' and a screenplay 'Crazy House'. He was recently invited to submit a piece on Samuel Beckett for a forthcoming book about musicians and their literary heroes, 'Filthy Lyre', and his lyrics for 'Cold Coffee & Ava Gardner' were included in a new book about Ava Gardner by Connecticut State University Professor Gil Gigliotti.

?Lyndon Morgans's Welsh wanderers explore the soul's secrets and heart's longings on this richly-layered album. Musically, lyrically and emotionally, Songdog, rather than the more celebrated Manic Street Preachers, are the true bards of Blackwood." Gavin Martin, The Mirror
"Lyndon Morgans's lyrics are as evocative as ever...magical songs...You'll be with him all the way" James McNair, Mojo
"Terrific stuff!" Robert Wyatt
?..Their music is dark and sinister and beautiful and Lyndon's songs are by turns sexy, scary, funny, creepy, heartbreaking and usually always brilliant.? Allan Jones (Editor), Uncut
?..like Nick Cave, he sings as if the world's end is nigh, and does so convincingly? Q
"..glacier-paced folk noir..the storytelling hints at a real gravity.' NME
?One of those life-changing albums where you'll remember forever where you were when you first heard it? RocknReel
?Intense & sensual collection of baroque, last chance lives...supremely evocative imagery that lesser poets can only aspire to? Maverick
"A totally unique sound" Jack Douglas (Producer - John Lennon, The Who, Miles Davis, George Harrison, Patti Smith, New York Dolls)
"Beautiful.." Jonathan Ross

Discography
Songdog's music has been played on a range of radio shows including Jonathan Ross and Janice Long on BBC Radio 2, Gideon Coe on BBC 6 Music, John Kennedy on London's XFM, the Arctic Circle and Hello Goodbye on Resonance FM plus other regional and international play.