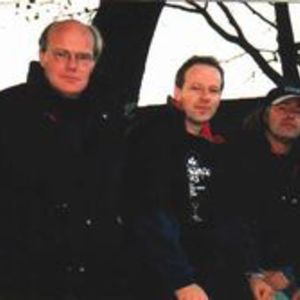 The idea for this muscial project came from FLAMBOROUGH HEAD's keyboard player Edo Spanninga and was by accident when he tested some recording equipment in order to record Seventies styled music as a fun-project. Eventually Edo was so excited about the results that he recruited other FLAMBOROUGH HEAD member Eddie Mulder (guitars and bass) and ODYSSICE drummer Menno Boomsma to make an album. The name TRION is a contraction of the words ?trio' and ?(Mello)tron', simply because the band is a trio and because Edo only used Mellotron samples (flute...

All enjoyed making music as the trio TRION and eleven the tracks on their debut-CD "Tortoise" (2003) are no leftovers from Flamborough Head and Odyssice except the song "Spectrum of Colours" (Eddie originally wrote it for FLAMBOROUGH HEAD). The warm and melodic music ranges from classical and folk to symphonic rock and has hints from early IQ, MID GENESIS and YES and bands from the EARLY BRITISH PROGRESSIVE ROCK MOVEMENT like GRACIOUS and SPRING. It contains lots of fine guitarwork and moving Mellotron sounds (from a flute like "Strawberry Field Forever" to a choir like "Afterglow"). The wonderful cover art is made by Jasper Joppe Geerts, no surprise he's a Roger Dean aficionado! The TRION members will now concentrate on their bands (ODYSSICE is working on a new CD) but another album is an option for the future.

The music on TRION's debut-CD "Tortoise" is simply structured but it sounds very moving and is loaded with beautiful Mellotron samples. Eddie Mulder does a good job with his varied guitarplay (from mellow twanging acoustic guitars to howling electric guitar solos) and Menno Boomsma delivers a solid but subtle background. Some will complain that this album sounds a bit tame or too laidback but others will describe it as warm and compelling music. In my opinion we have to be grateful that TRION got the chance to make this wonderful music, far beyond the emotionless, predictable and multinational sponsored commercial crap from the charts. Tron maniacs alert, this is a Mellotron fan's wet dream!
--
www.progarchives.com