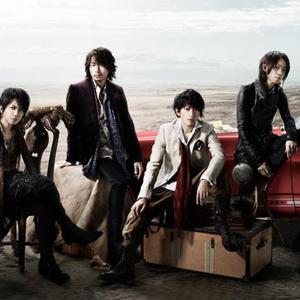 Formed in 1991, L'Arc?en?Ciel is one of the most popular rock bands from Japan. The band consists of vocalist hyde, leader and bassist tetsuya, guitarist ken, and drummer yukihiro, who replaced drummer sakura in 1997. From their beginnings in Osaka, Japan, they previously included guitarist hiro and drummer pero. All four members are established composers which adds variety to their catalog of songs. Their music ranges from ballads, to hard rock, to light pop-rock tunes.

Their debut single Blurry Eyes released in 1994 was used as the opening theme for the animated TV show DNA?. In late 1996, L'Arc?en?Ciel gained worldwide attention for the first time after the release of their fourth album, True. This album includes the single the Fourth Avenue Cafe, which was used as an ending theme for the popular animated TV show Rurouni Kenshin. However, drummer sakura was arrested for drug possession and consequently all L'Arc?en?Ciel merchandise was removed from store shelves. The release of their single the Fourth Avenue Cafe was canceled and the song was immediately removed from the TV series.

sakura left the band in 1997, and former die in cries drummer yukihiro replaced him for the REINCARNATION tour that year, subsequently serving as a support member for their first single after the incident, ? (Niji). Eventually, yukihiro officially joined the band and released the album HEART in 1998.

After the release of their eighth album REAL in 2000, L'Arc?en?Ciel went on a hiatus, releasing only compilation albums aside from their 2001 single, Spirit dreams inside -another dream-, the theme for the CG-animated Final Fantasy movie. During this time, each member engaged in solo projects: yukihiro with the band acid android, ken and former L'Arc?en?Ciel drummer sakura with SONS OF ALL PUSSYS, Hyde as a solo artist, and tetsu as TETSU69. On March 31st, 2004, L'Arc?en?Ciel released SMILE, their first album in four years.

On July 31st, 2004, L'Arc?en?Ciel performed their first concert in the United States at Otakon, a Japanese animation convention. They performed for an audience of more than 12,000 in Baltimore, Maryland.

They are best known outside of Japan for the song READY STEADY GO, which served as the second opening theme for the animated series Fullmetal Alchemist, and Link for the show's respective theatrical film. These songs earned them substantial Western popularity and attention to their album, SMILE, which was released in the United States by American label Tofu Records.

After more than a year since SMILE, the band released AWAKE on June 22nd, 2005, which was accompanied by ASIALIVE, L'Arc?en?Ciel's first tour to take them to South Korea and China, as well as the Japanese AWAKE tour.

The year 2006 marked the band's 15th anniversary since their debut. It was celebrated with the release of a box set of books titled L'Arc?en?Ciel BOX, re-releases of their first 15 singles along with the albums ark and ray, and the L'Anniversary live concerts held on November 25th and 26th. They also finally released the Fourth Avenue Cafe, the single canceled nearly 10 years prior, as part of their 15th anniversary celebrations.

The year 2007 saw increased activity for the band, with the release of four new singles, four DVD releases, the new album KISS, and the beginning of two back-to-back tours. The first was TOUR 2007-2008 THEATER OF KISS in Japan, followed by L'7 ?trans ASIA via PARIS?. The latter tour took them through Shanghai, Taiwan, Paris, Seoul, Hong Kong, and a return to Japan for shows in Tokyo and Osaka. At the end of this tour it was announced that the band would not tour again until their 20th anniversary in 2011. The band, however, says they're not on hiatus.

2008 saw the release of two new single from the band, DRINK IT DOWN released in April, and the double A-side NEXUS 4 / SHINE in August. Since then, HYDE has begun a new solo project with former Oblivion Dust guitarist K.A.Z as Vamps, with the release of a self-titled album and successful tours in Japan and the United States. With the legacy of 11 albums and 35 singles, L'Arc?en?Ciel continue to gather more and more fans throughout the world who eagerly await their return to renewed band activities.