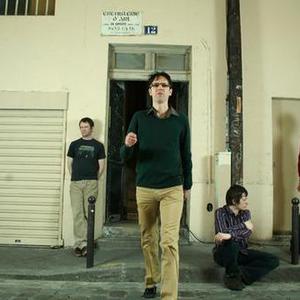 Spearmint is a London-based indie pop band, founded in 1995 from the ashes of a project called 'Laverne and Shirlie'. Their sound can be said to be classic British guitar pop, with some northern soul influences. The founding members were Shirley Lee (lead vocals, guitar), Simon Calnan (vocals, keyboards), Martin Talbot (bass) and Ronan Larvor (drums). Talbot left soon afterward, to be replaced by James Parsons.

Spearmint have released eight albums and many singles, all on their own label, hitBack, having a minor success with 1997's Sweeping The Nation and A Trip Into Space, both of which grazed the UK Top 75. We're Going Out received some airplay on BBC Radio 1 and was remixed by long-time Pet Shop Boys prodcuer Stephen Hague.

Their most recent studio album, Paris In A Bottle, was released in the summer of 2006.

During the initial few months of gigs around the homes of the band members in south-east London, Spearmint put out a run of 500 white label 7" singles featuring "Somebody" and an early version of "I Can't Sleep" on their own hitBack label. The song featured an unauthorised The Beatles sample, which should have made them infamous at the very least. It was not to be, but it was fiery enough to get a manager on board.

The original bass player left later that year, so the band advertised in Melody Maker for a new bass player and met James. He'd just parted ways with previous band Supersaurus and was really looking to play guitar, but they persuaded him to play bass with promises of records, glamour and riches, and he joined. As a double bonus he turned out to be a genius graphic artist, and would design all the band's record sleeves from then on.

"Goldmine" was recorded in January 1996. A producer, JB, had been recommended and he agreed to mix the track - and he has worked with the band ever since. Vital unexpectedly agreed to distribute the record, which was a massive boost, as the band probably hadn't even played in North London by this point.

By that summer the band started playing every back room in North London, and picking up fans left right and centre. By the end of spring '97 an unnamed indie record company had decided to put out the next single A Week Away, but weeks of dithering meant momentum was being lost. The band scraped together the cash and put it out by themselves once again. It sounded as if Spearmint had the sweetest horn section in pop, but it was Simon with a scratched The Four Tops record providing the driving sample behind the song.

After the big gap between 'Goldmine' and 'A Week Away', they got straight down to business with the next record, 'I Can't Sleep'. A reworked and remixed version of an old recording. It was backed with a 4-track cassette recording of Shirley's done the previous year called Songs for the Colour Yellow. It came out hot on the heels of 'A Week Away', and ever-increasing sales led to the record being released on CD as well.

The third single of 1997 was Sweeping The Nation. Based around a loop taken from the sublime Northern Soul classic "Out On The Floor" by Dobie Gray, it was released in November just as London's new alternative station XFM was taking shape. They couldn't get enough of it, and put it on their main playlist for 6 weeks. Along with several plays on daytime Radio 1, it meant that the song was impossible to ignore.

Over Christmas the band were mentioned in several papers - including The Times! - as one to watch in 1998, and immediately the band started work on another single A Trip Into Space. A totally re-written version of a song Shirley had composed in pre-Spearmint days. Again, XFM loved it to bits and it seemed to become a permanent fixture on the radio throughout March and April.

The band embarked on their first UK tour, with their Leeds show being recommended as gig of the week in the NME. The band also finally received full page interviews in both Melody Maker and NME, as well as dozens of fanzine articles from as far and wide as Berlin and Tokyo. And to crown it all, the band received their first national chart placing - number 82 with a bullet!

Are You From The Future ?

It's Time To Vanish (Vinyl)

A Week Away (Special Edition)

Paris In A Bottle