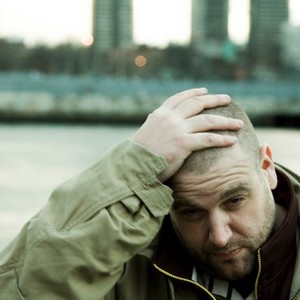 Residing in the boogie down Bronx, Rob has been devoted to music since he was a kid, maintaining a deep connection to it in multiple forms (The Beatles, The Stones, Melle Mel, Run DMC, Kraftwerk, The Soul Sonic Force, The Talking Heads, Zeppelin, BDP, Public Enemy, Muddy Waters, UltraMagnetic MC's, The Clash, Devo, Goblin, David Bowie, EPMD). He developed his expressive abilities through grinding for 10 + years in New York City, living life in a way unique to the New York experience ? hard fought, hard luck, high stress and no money tempered by huge dreams.

In 2000, Rob gained critical acclaim as the front man of the group Sonic Sum, who's album The Sanity Annex won rave reviews in the U.S., Europe and Japan, with SPIN magazine voting it the ?2nd Best Album of the Year that No One Heard?. Kudos rolled in from publications such as The Source, The Wire, XXL, NME, Urb (Next 100), and CMJ. Word got around and soon came offers from artists like DJ Krush and Funkstorung to get down on their albums, a collaboration with Slug (Atmosphere) and Mike Ladd, plus shout outs from Radiohead, Bobbito Garcia, Autechre and others. Rob also loves spaghetti and happened to share the same management as Def Jux honcho El-P, and a friendship, as well as mutual artistic respect, formed. In 2003, Rob signed with the label, asking only for the opportunity to make a record with his heart, mind and soul, hence, Telicatessen. And it's all we could have ever asked for.
-Def Jux site