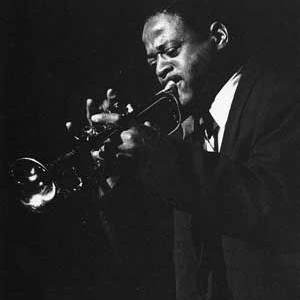 Clark Terry (born December 14, 1920 in St. Louis, Missouri), nicknamed Mumbles, is an American swing and bop trumpeter, a pioneer of the fluegelhorn in jazz, educator, and NEA Jazz Master. Clark Terry attended Vashon High School, and began his professional career in St. Louis in the early 1940s by playing in local clubs before joining a Navy band during World War II. Afterwards, he played with Charlie Barnet (1947), Count Basie (1948-1951), Duke Ellington (1951 to 1959), and Quincy Jones (1960).

Clark Terry attended Vashon High School, and began his professional career in St. Louis in the early 1940s by playing in local clubs before joining a Navy band during World War II. Afterwards, he played with Charlie Barnet (1947), Count Basie (1948-1951), Duke Ellington (1951 to 1959), and Quincy Jones (1960). He also performed and recorded regularly both as a leader and sideman. In all, his career in jazz spans more than sixty years.

His years with Count Basie and Duke Ellington in the late 1940s and 1950s established him as a world-class jazz artist. Blending the St. Louis tone of his youth with contemporary styles, Terry's sound influenced a generation. During this period, Terry took part in many of Ellington's suites and acquired a lasting reputation for his wide range of styles (from swing to hard bop), technical proficiency, and infectious good humor. In addition to his outstanding musical contribution to these bands, Terry exerted a positive influence on musicians such as Miles Davis and Quincy Jones, both of whom credit Clark as a formidable influence during the early stages of their careers.

After leaving Ellington, Clark's international recognition soared when he accepted an offer from the National Broadcasting Company (NBC) to become its first African-American staff musician. He appeared regularly for ten years on the Tonight Show sitting in with the Tonight Show Band led by Doc Severinsen, where his unique "mumbling" scat singing became famous when he scored a smash hit as a singer with his irrepressible "Mumbles.".


Clark Terry album "Having Fun", a perfect example of his humor. He also continued to play jazz with musicians such as J. J. Johnson and Oscar Peterson, and led a group with Bob Brookmeyer that achieved some popularity in the early 1960s. In the 1970s, Terry began to concentrate increasingly on the flugelhorn, from which he obtains a full, ringing tone. In addition to his studio work and teaching at jazz workshops, Terry toured regularly in the 1980s with small groups (including Peterson's) and performed as the leader of his Big B-A-D Band (formed c 1970). His humor and command of jazz trumpet styles are never more apparent than in his "dialogues" with himself, either on different instruments or on the same instrument, muted and unmuted.

From the 70's through the 90's, Clark performed at Carnegie Hall, Town Hall, and Lincoln Center, toured with the Newport Jazz All Stars and Jazz at the Philharmonic, and he was featured with Skitch Henderson's New York Pops Orchestra.

Prompted early in his career by Dr. Billy Taylor, Clark and Milt Hinton bought instruments for and gave instruction to young hopefuls which planted the seed that became Jazz Mobile in Harlem. This venture tugged at Clark's greatest love - involving youth in the perpetuation of Jazz. Between global performances, Clark continues to share wholeheartedly his jazz expertise and encourage students. Since 2000, he hosts Clark Terry Jazz Festivals on land and sea, and his own jazz camps. More than fifty jazz festivals on all seven continents still feature him as a guest artist.

The Happy Horns Of Clark Terry It's What's Happenin'