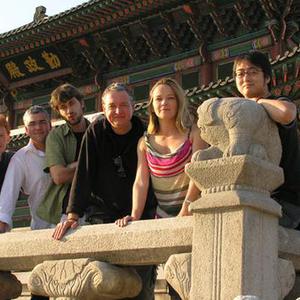 Drummer & composer Patrick Forgas spent nearly a decade learning his craft among the many French rock, psychedelic and blues bands of the 1970's. In 1977 he recorded and released his first album Cocktail, with a cast of musicians which read like a who's who of the French progressive scene at the time, including former and future members of Magma and Zao. With the demise of his record label, Patrick's band broke up and he retired from active work in music.

In 1993, he formed the original version of his Forgas Band Phenomena. Playing a composed and well-orchestrated jazz-rock, they recorded two excellent albums for a tiny French label in the late 1990's. In 2005 Cuneiform released Soleil 12 (CN20218), their third album, but their first to be distributed outside of France, to terrific reviews and good radio play. Since that time they have played shows in France and abroad (most recently in Seoul, South Korea in October, 2008), doing everything that they can to have their Personnel: Benjamin Violet (guitar); Karolina Mlodecka (violin); Sebastien Trognon (flute, tenor saxophone); Dimitri Alexaline (trumpet); Igor Brover (keyboards); Kengo Mochizuki (bass instrument); Patrick Forgas (drums). Arranger: Patrick Forgas