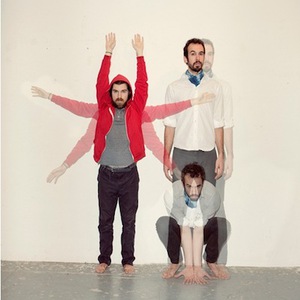 ?... musical project of Ben Bromley and Ross Simonini, two multi-instrumentalists who remain friends. Goalball is a game designed for the blind, kind of like handball. A lot of good bands came out of the goalball scene back in ?83, ?85?the Sweetie Motions, the Sans Larrys?and NewVillager listened to all of them, mostly in Ross's car, a Karmann Ghia he bought from Ben's mom, against the wishes of Ben's dad. They formed the band to carry that torch forward, and started out playing low-level Goalball tournaments, rigged games in bad neighborhoods, but Goalball is supposed to be played in total silence, because the ball has bells on it. They should have known; it was a tough time for the two of them, tougher than most. The thing is, they listened, they soaked it up, the sound of that ball and its bells, and then they went into the woods and wrote a record. Everything matters, is the point, even when you're in the woods and your name implies isolated tribesmen and latter-day gay archetypes. It's like George Steiner says: ?Explorers' postulates about totally isolated tribes, about corners of tropical forest or mountain innocent of any contact with the outside are largely spurious. Good shivery stuff for the glossy magazines. How word sped across the barbed lines of mutually incomprehensible tongues, how iron utensils from the distant fringe stations came to be found in the inmost of the Mato Grosso, was something of a riddle. But the facts were certain. News could tear like invisible fire through thicket and across cataracts. You had only to listen and it came humming back.'? - Philadelphia Herald-Times