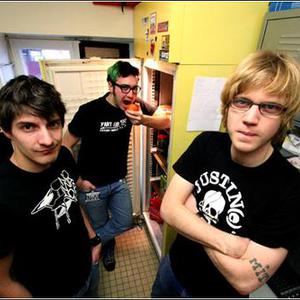 Guerilla Poubelle is a four piece french punk-rock band from Paris, sometimes referred to as artcore because of the presence of a painter on stage at all performances. The band's initial line-up was Till on guitar and vocals, Kojak on bass guitar, Chamoule on drums and Jokoko as painter, agitator and doing backing-vocal. In early 2006, Chamoule was replaced by Axel on drums. The band started in the summer of 2003, created by former members of the ska-punk band Les Betteraves Till & Kojak.

The band started in the summer of 2003, created by former members of the ska-punk band Les Betteraves Till & Kojak.
GxP (the now typical short for Guerilla Poubelle) takes on again from the bases of the Betteraves, but with enough of a difference to make it a completely diffrenct band : more electric, punk, more yelling, more melodic, more libertarian, much darker, more disturbed, more accessible, more alternative, more morbid, more not and nonconformist, more destroy, more industrial and biodegradable.

The band's name comes from the idea and/or fact that recycling in modern western countries has almost become an act of terrorism owing to the (often cynical, or at least ironical) band.
To quote singer and lyricist Till "When you tell people you recycle, they tell you "oh that's great, how good of you!". It's not great or nice, it should be fucking normal".

Yet, this shouldn't lead to think the band is an ecologist band. As much as they feel concerned by the envirnment, they tackle a lot more issues and subjects in their songs. Most of their lyrics, all in french, talk about dealing with personnal issues such as diffrence, boredom and outrage in the context on an apathetic society.

In 2007, they released their album, PUNK = EXISTENSIALISM on Guerilla Asso + Crash disques.
The first track, Punk Rock is Not a Job is an excellent anthem destined to become one of their most popular songs.