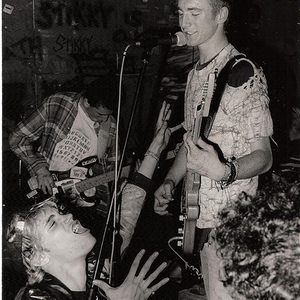 Crimpshrine was a punk rock band from Berkeley, California. It was formed by Aaron Cometbus, founder of the seminal punk rock zine Cometbus, and a friend, Jeff Ott. The band's origins go back to 1982. Within D.I.Y. communities, the band is often considered one of the most important punk bands, especially in the Bay Area scene. Crimpshrine's origins are traced back to S.A.G. S.A.G. was formed in Berkeley, CA during the summer of 1982 by Jesse Michaels (of later Operation Ivy fame) (just 12 at the time) and Aaron Cometbus.

Crimpshrine's origins are traced back to S.A.G. S.A.G. was formed in Berkeley, CA during the summer of 1982 by Jesse Michaels (of later Operation Ivy fame) (just 12 at the time) and Aaron Cometbus. The band mostly did just tape dubs with Jesse and Aaron trading off on instruments. It wasn't a functioning band until 1983 when Jeff Ott (at 12 years old) was brought in. Jeff played drums (even though they only had one drum). Jesse only sung, and Aaron played a guitar with only 3 strings. Later, they had changed their name to Revolution Through Apathy. S.A.G. had split up in early 1984. There were some rumors that Jesse was kicked out for smoking too much pot, so Jesse went one way and Aaron and Jeff went another. Jesse was Crimpshrine's original vocalist until he was not in the band. However, years later he came back and did some live backup vocals with Crimpshrine. There may be some tape dubs floating around, but other than that, the only released material that can be found by S.A.G. was one song- "I Had To Kill Some Ants Today" on Aaron Cometbus's "Lest We Forget" compilation. It was released in 1991 on tape by BBT Tapes. Other than that song, no other songs are known to be released by S.A.G. However, some S.A.G. lyrics were used in Operation Ivy in the end of Plea for Peace and some other songs such as Steppin' out.

After S.A.G.'s breakup, Aaron and Jeff switched off on instruments. Sometimes Aaron would play guitar and Jeff would play the synthesizer or piano or they would both play guitar. Eventually, Isaac (unsure of his last name) joined the band, first on violin, and then synthesizer. Lint from Operation Ivy played bass for a little while. This was the start of Crimpshrine. Finally, Crimpshrine became Jeff on guitar and Aaron playing drums and percussion. The only song used from those early Crimpshrine days on their later recordings was Tomorrow, which was originally an instrumental but eventually had words. In late 1984, Aaron was able to get a real drum set, and it was decided that Jeff would sing. The original plan was to have a female vocalist but that never happened. After going through 6 bassists (Ron, Chalky, Lint, and later Dave Ed, Spider, Suzie, David, Chris, Ben Weasel, and John J.) and one and a half years of confusion, Crimpshrine played their first show. However, their bassist decided to quit right before the show, so they had to get a replacement bassist learn 3 of their songs in 5 minutes. Pete Rypins joined the band in October of 1986 as the bassist and Crimpshrine finally began to play some real shows instead of playing in Jeff's basement most of the time. Their first demo was recorded in February of 1987. Then, they did 2 songs, Another Day and Rearranged, for the Turn It Around compilation. Their first EP, "Sleep, What's That?" was recorded in September of 1987 and released in January 1988 on Lookout Records.

They gained a second guitarist, Idon Bryant, prior to Sleep, What's That's release. He was not included on that album, but played on their second full-length, "Lame Gig Contest." It was rejected by Lookout Records, but put out by Musical Tragedies, a German label, with the lyrics translated from English to German in the sleeve. This is a very rare album to come across, however much of it was released in other Crimpshrine albums, such as Duct Tape Soup and The Sound of a New World Being Born.

The band was in various newspaper articles in their time, some describing them, others for their way of publicizing themselves. They would write "Crimpshrine" (which was a name they gave to a girl they knew with crimped hair) all over Berkeley High School's walls, as well as purple dots and other grafitti. Their principal actually supported the grafitti! One of their best articles was from in the Oakland Tribune, who went to BHS wanting to interview a band. They were interviewed by Maximum Rock N' Roll in 1988 as well.

After Lame Gig Contest came another EP, "Quit Talkin' Claude." Quit Talkin' Claude was released Claude was a renowned Berkeley scenester who was said to never shut up. Idon Bryant and Pete Rypins had left the band by that time. Pete was replaced by Paul Curran on bass. When Paul joined the band in 1988, Crimpshrine toured for awhile. His brother, Jack, was a roadie. Paul drove the Pinto they toured in. Jake was a roadie from time to time as well. He sang on one of their songs. Zak and Dennis were also roadies.

The 1989 release of Quit Talkin' Claude on Lookout Records was their farewell record, as they had split up. Quit Talkin' Claude was recorded in January of 1989 with Kevin Army, who worked with Operation Ivy and many other bands. After this release Crimpshrine was on some other compilations. Lookout released two retrospectives, containing some unreleased and hard-to-find Crimpshrine songs, The Sound of a New World Being Born and Duct Tape Soup. They made a split EP in 1988 with Boneyard and A Priori called Caution. It was released on Skene Records. They appeared on "The World's In Shreds" with the song Pretty Mess. It was an EP released in 1989 on the record label Shredder. Jawbreaker, Moral Crux, and A Priori appeared on this album as well. They appeared in 1993's "Benicia..." compilation put out by Take A Day on cassette. The song "Going Home" by Crimpshrine on that compilation is not known to be released on any other album. Other bands on it were Pinhead Gunpowder (Aaron's drumming) and Monsula. Crimpshrine were on some Lookout compilations. One of the obvious ones was The Thing that Ate Floyd, which contained many other of the Gilman era bands. They appeared with the song "Sanctuary" on Lookout's 1998 compilation Forward Till Death. They did a split with Mutley Chix in the No Idea Fanzine (issue 7). The Crimpshrine songs were Closed Doors Closed Minds, Caught Up, and Fucked Up Kid. Mutley Chix did Small Town, Big Hell and Lamp. Their real farewell album was a split single released in 1990 on the record label No Reality. It was called the Burning Bridges EP on their side. On the other side was Angel... Your Hair Looks Good! by G-Whiz. The two songs by Crimpshrine on their farewell album were Over the Years and The Direction of Things to Come. Over the Years was taken from their first demo which was recorded with Brian Edge at Gilman in January of 1987. It was recorded with Pete but not with Idon. The Direction of Things to Come was taken from their last studio recording session in January of 1989. It was recorded by Kevin Army. It featured Paul, Jeff, and Aaron.

Crimpshrine fell apart in 1989 and the members went their separate ways. Jeff went into Fifteen, Aaron got involved with countless bands such as Pinhead Gunpowder (with Billie Joe Armstrong) and Astrid Oto. Paul was in Go Sailor and Shotwell Coho, and also did a stint with Sweet Baby; he now plays bass and sings in both Surrender and Onion Flavored Rings. Idon has been in a fairly popular East Bay hardcore punk, Strychine. Pete resurfaced in Tilt, and has been playing with The Tantrums for over 10 years. Check them out at their homepage or at their Myspace page. Crimpshrine, the heart and soul of the East Bay, lives on through the other members projects and through the people that still listen to them and are inspired by them today.

The Sound Of A New World Being Born