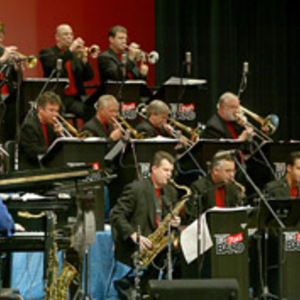 Gordon Goodwin's Big Phat Band, or simply The Big Phat Band, is a Grammy-nominated 18-piece Jazz ensemble based in California and led by Grammy and Emmy award winning artist Gordon Goodwin. Goodwin composes most, and arranges all, of the group's performance pieces, as well as playing piano and occasionally tenor saxophone. Formed in 2000, the group comprises many of Los Angeles' most acclaimed jazz musicians(including Eric Marienthal, Wayne Bergeron, Andy Martin) and has featured some greats such as Chick Corea, Johnny Mathis, and many others.

To date, the band has released four albums under Immergent Records; The latest: That's How We Roll

Wrap This! A Big Phat Christmas

Life In The Bubble

That's How We Roll

Swingin' For The Fences