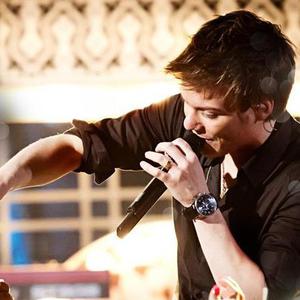 Michel Tel? (Medianeira, January 21, 1981) is a Brazilian singer and composer. Tel? was part of two music groups but was in Group Tradition that his career as a singer took off. The group's biggest hits, were "Goodbye", "The Cauldron", "Forever My Life", "The Brazilian", and "I Want You". In addition to being a singer-songwriter he is also a dancer and plays the accordion and harmonica. Tel? received international fame when many football players used the signature dance to "Ai se eu te pego" during goal celebrations, spreading the song's popularity.

Tel? received international fame when many football players used the signature dance to "Ai se eu te pego" during goal celebrations, spreading the song's popularity. The Football Player Neymar appears on a video dancing the song "Ai Se Eu Te Pego" of Michel Telo. In the National Professional Football League of Spain, players Marcelo Vieira and Cristiano Ronaldo (of Real Madrid C.F.) danced to this song when Cristiano scored the first goal against M?laga CF on October 22, 2011. The single not only topped the Brazilian charts in 2011, but also it went to #1 in many other countries, including France, Germany, Italy, The Netherlands and Spain. The song reached the Billboard Hot 100, making Michel Tel? the first Brazilian solo act to have a song enter the US singles chart since S&eacute;rgio Mendes in the 1960s.

Tel? started his career in 2009 with the album Balada Sertaneja released by Brazilian record label Som Livre. It was produced by Ivan Myazato and resulted in two singles: "Ei, Psiu! Beijo me liga," a great commercial success, and "Amanh&atilde; Sei L&aacute;". The release of the live album Michel Tel&oacute; &ndash; Ao Vivo was an even bigger success and awarded Tel? a gold disc. This culminated in a huge concert on September 16, 2011, attended by reportedly 50,000 people in a double ticket, which included Tel? and Jo&atilde;o Bosco & Vin&iacute;cius at Terra?o Daslu. Throughout 2011, Tel? played over 240 shows. According to Forbes magazine, Tel?'s Fugidinha Tour was attended by more than 17 million people and Tel? has reportedly made $18 million dollars alone in 2011. Tel? has also released two DVDs, one containing songs from the 1980s and 1990s, in collaboration with Milion?rio & Jos? Rico, Bruno e Marrone, and Jo?o Bosco & Vin?cius, and the other, entitled Michel Na Balada, including new songs.