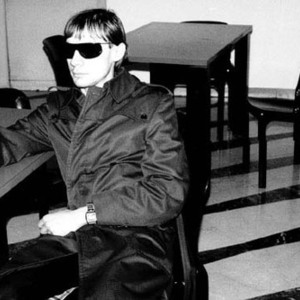 The music of Marco Corbelli's Atrax Morgue is a sinister, synthesizer-based dissonance rich with pulsating tones and throbbing static beats. His severely distorted electronic voice reverberates through the fore ground like the spoken word performance of a homicidal maniac. Tracks like "Hungry for human" and "Sperm on dead faces" from Woundfucker are jolting forays into the extremes of Noise; the songs as aurally disturbing as their titles imply.

In contrast, much of the material on DeathShow illustrates a softer, more ambient approach to the genre, such as the unsettling soundscapes of "Terrortory" and "Music for dead brains". However, maybe even more deranged than his music, Corbelli's worldview is darker still. What started out in 1990 as an Italian fanzine focusing on murder, necrophilia, and the harsh sounds of power electronics soon became an obsession. Corbelli's Murders zine only lasted three issues but ended with the creation of his Atrax Morgue. Influenced by bands such as Whitehouse and Brighter Death Now, his first recorded 'aberration' was entitled In Search of Death, released on cassette through his Slaughter Productions imprint. The label would expand into a catalog of Corbelli's music as well as a mail-order purveyor of other Noise artists. Now, Corbelli has worked with other bands he has greatly admired, including Raison D'?tre, Inanna, Runes Order, and Bad Sector. In 1993, Slaughter Productions put out a limited edition CD, Death Odors-- an International compilation featuring some of Corbelli's favorite Noise and Death-Industrial acts. Slaughter Productions' catalog has grown to over a hundred releases on cassette, CD, and vinyl format while the music of Atrax Morgue continues unabated. Perhaps, there is consolation in the fact that Corbelli confines his obsession to art and sound, rather than resorting to far more adverse methods of self-expression. Also, he owned Slaughter Productions label.

A BRIEF INTRODUCTION TO AN OBSESSION

Atrax Morgue started his sick activity in 1992. It was in a summer night, i was out with some boring friends, they talked about boring things and i was full-immerged outside all?
I was thinking about my project's name and then i found the name ATRAX MORGUE (note: ATRAX comes from: "Atrax Robustus" aka "Funnel Web Spider" the most dangerous/lethal spider in the world). It sounds nice and i decided for it. It was also good because it reflects my obsession for spiders and for DEATH.
The first powerelectronic record i listened was "Beyond Unknown Pleasures" by the italian sadistic project "The Sodality"mastermined by Andrea Cernotto. I was intrigued by this record? I liked it so much, than i contacted the guy behind this project and finally i decided to meet him. He was a nice guy, and we shared some interest in common? I remember he shown me an incredible collection of De Sade's books?
Another record of my first approach to powerelectronics was WHITEHOUSE's "Dedicated to Peter Kurten" ; it was shoking and at first i didn't understand it at all? But then i started to listen to others WHITEHOUSE lp's and at last i was finding myself totally into them. Ohter bands i was listen to was Genocide Organ and Brighter Death Now.

I started my first recording session in summer 1992, at a friend's home, with a friend's equipment. "In Search of Death" was recorded in a week, and i used just a keyboard, a multi effect and voice. (this is definitely the current ATRAX MORGUE equipment: analog keyboard / multi-effect).

So, obsessions has found a way to comes out. Through violent and cold analogue electronic sounds, and my own voice.
I had/have a million of obsessions/manias, all around the most important: DEATH. MURDER,ISOLATION,PSYCHOSIS,PORNOGRAPHY,NECROPHILIA,PATHOLOGY,FETISHES,DISEASES, and tons of other disturbing subjects are a matter of inspiration and a way to explore human's most deepest desires and perversions.

In 1998 i started an ATRAX MORGUE side project called M?-RDER MACHINE; the main difference is that here i used some harsh rythms mixed with the usual analog noise and voice; i recorded the first tape "HappybirthDeath" and a second "DeathShow" that i released later on compact disc; the project has a good feedback and now i'm in the process to work on the second M?-RDER MACHINE CD release.

Through the years, ATRAX MORGUE have developed his style in making noise aberrations; since it was more rough and straight, now is more refined, minimal and scheming in the structure. My personal life'ss sssick experiences and my mental decay have contributed a lot in any ATRAX MORGUE release and efforts. I think that my last works shown exactly that i am become an obsessed schizophrenic-paranoid? and of course a chronic nerves sufferer.

I'm still disgusted by humans and i found them useless? like myself.
The difference behind me and a human is that i have no problems to admit it.
That i'm nothin than a useless still-born creature.
By now, after 31 years of life on planet earth, i have reached a massive and devastating dose of nihilism and rejection about ANYthing i do.
To me, the most creative act is DO NOTHING.
I can just take care of my corpse, before entering inside a beautiful fresh coffin, finally DEAD.

and unofficial site at
http://atraxmorgue.info