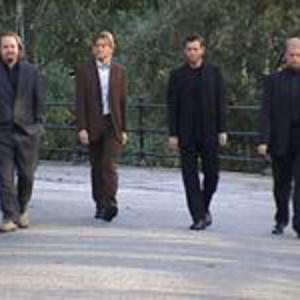 During 1996 to 2000 Linus Kase, was studying at the Royal College of Music in Stockholm. Being influenced by 70?s oriented prog acts like ELP, GENESIS, GENTLE GIANT and YES he, in addition to being pretty much out of fashion, was dreaming of starting his own band, playing only original music. Soon he found out that his fellow schoolmate Kristofer Eng was a big fan of YES. They continued talking about the progressive rock music of the 70?s until the temptation of starting a band could no longer be ignored.

The band was founded early 2000 and started out as a trio with Kristofer Eng on bass, Daniel Kase (Linus? brother) and of course Linus Kase on keyboards and saxophones. BRIGHTEYE BRISON turned quartet as guitarist Johan Oijen joined the band in November 2000.

BRIGHTEYE BRISON?s first studio output (a demo really) entitled "4:AM" saw the light early 2001. Amazingly mixed by studio wizard Per Hallman this offering was enough to give the band their record deal with Rivel Records.
During 2002 BRIGHTEYE BRISON were recording material for the full-length debut album as well as playing live shows. The CD was officially released in January 2003 and just weeks before Per Hallman (who also co-produced the album) had become a fulltime member as BRIGHTEYE?s live soundtechnician and recording engineer. Per also sings and writes (beautiful) music for the band.

This band is highly recommended!
--
www.progarchives.com

The Magician Chronicles: Part I