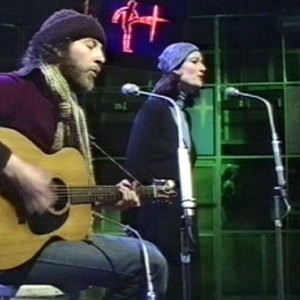 From 1973 to 1982, British folk legend Richard Thompson (having quit Fairport Convention in 1971) recorded as a duo with his wife Linda Thompson. This period saw a great amount of critical praise for Richard's songwriting and Linda's voice, though not much popular success. Following their divorce, both pursued solo careers. The Thompsons recorded three albums I Want To See The Bright Lights Tonight (1974), Hokey Pokey (1975) and Pour Down Like Silver (1975) before they decided to leave the music business and moved to a Sufi commune in East Anglia.

The Thompsons recorded three albums I Want To See The Bright Lights Tonight (1974), Hokey Pokey (1975) and Pour Down Like Silver (1975) before they decided to leave the music business and moved to a Sufi commune in East Anglia. Songwriting was by Richard throughout, lead vocals generally by Linda,and backing by a consistent core band of English folk-rock stalwarts

I Want to See the Bright Lights Tonight showed a clear development from Richard Thompson's first solo effort Henry The Human Flywith Linda's vocals adding grace, as well as the opportunity for Richard to write from a female perspective. Although Thompson's trademark gloom is already evident, the lightness and beauty of the arrangements counterbalances this to produce moments of great beauty. The use of brass, from the renowned CWS silver band in particular takes forward Thompson's continuing crusade to find a more contemporary and ordinary expression of Englishness in music,(as opposed to say the forays into the Morris form of his Fairport contemporary Ashley Hutchings, solo and with The Albion Band). The next year's release, Hokey Pokey to some extent repeats the formula, although it is improved in production values, and is stylistically more adventurous still. A Heart Needs a Home is a minor miracle of songwriting, expressing the longing for love without cynicism and has a standout multi-tracked vocal from Linda.

Pour Down Like Silver extended the reach of Richard and Linda's music, and without the occasional weaker tracks of the preceding releases. Here in the writing cynicism is balanced with humour, (Hard Luck Stories, Streets of Paradise), and love and need is expressed directly, and to touching effect ( Jet Plane in a Rocking Chair, Beat the Retreat). The impact of Sufism on their lives is expressed in Night Comes In, which borrows imagery from Sufi mystic poetry, and the practice of finding union with the Spirit through dance. The playing, arrangements and production are uniformly excellent throughout.

In 1978, Thompson decided to take his family out of the commune and go back to their old home in Hampstead. He also decided to return to making music, partly because, as he commented at the time, he'd come to realise "that [he] wasn't really any good at anything else".

Re-uniting the core band, the resulting album, First Light was warmly received by the critics but did not sell particularly well. Neither did its follow up, 1979's harder-edged and more cynical Sunnyvista. Chrysalis Records did not take up their option to renew the contract, and the Thompsons found themselves without a contract, but not without admirers.

About a year later Joe Boyd signed the Thompsons to his small Hannibal label and a new album was recorded. Shoot Out the Lights included new recordings of many of the songs recorded in 1980, and was clearly a very strong album. Linda Thompson was pregnant during the sessions, and so the album's release was held back until the Thompsons could tour in support of the new album. Linda's pregnancy also meant that she did not sing on all of the songs.

On its release in 1982, Shoot Out the Lights was lauded by critics and sold fairly well - especially in the USA. The Thompsons, now a couple for professional purposes only, toured the USA to support the album and then went their separate ways. Both the album and their live shows were well received by the American media, and Shoot Out the Lights effectively relaunched their career - just as their marriage was falling apart.

As against the first phase of their career, this last offering is sparer, without the instrumental augmentation that characterized the earlier albums, much more rock orientated, and altogether more ferocious. Although Thompson in interviews has always resisted over-personal interpretations of his songs, it is difficult not to see in its energy, tone and themes the difficulties of the final stages of the Thompson's marriage, transmuted into musical gold.

Live At The BBC CD3