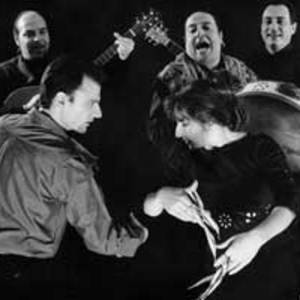 ?Spaccanapoli? stands as the climax of the musical career of two Neapolitan musicians long engaged in the field of traditional Neapolitan music. Featuring the historic worker's group ?E Zezi?, Antonio Fraioli, and Monica Pinto, found ?Spaccanapoli? and, in 2000, publish for Real World Records ?Lost Souls ? Aneme Perze?. A long series of international tours during which they achieve big success both of public and of critic (see ?press? & ?info Record?). Highly appreciated in the in the whole Europe, Canada, America, Mexico, Jappon, because of the enthralling performances.

The group springs from the consciousness of the complexity of Neapolitan oral tradition, which clashes with the languages of mass culture, proposing a music that represents a feasible dialogue between the expressions of modern culture and those of tradition.

From RootsWorld quoted by cdroots.com: ""In a reckless, enormously inspired experiment with the roots traditions of southern Italy and beyond, Spaccanapoli speaks powerfully to unemployed youth whose disaffection with a corrupt system and foreclosed life prospects find voice in "Piazza Dante" ("For thieves thrive and boast about it... / Ministers and judges are a calamity for the poor")... From the land of Antonio Gramsci and the Red Brigades, of Fellini, Rosellini and Wertmuller, Spaccanapoli already has the European folk circuit in its thrall, and now seems poised to rivet the consciousness of a new global base." - Michael Stone, RootsWorld
You may read more at http://www.rootsworld.com/interview/spaccanapoli.html

Deriving its name by the street that divides in two the ancient city centre of the modern town of Naples, and that with its by-lanes and the conspicuous historical-cultural stratifications represents symbolically its essence, SPAKKA-NEAPOLIS 55 springs from the need to express in the meantime the modernity of present, the roots of the past and the world of tradition


In March 2009 the gr publish ?JANUS? the new album, the second of the band after the debut album ?Aneme Perze / Lost Soul?, published by REAL WORLD RECORDS. The group was born in 1999 with the name ?Spaccanapoli? and in 2004 changed its name in SPAKKA NEAPOLIS 55.

The new album can boast the participation of some very special guests like Alim Qasimov ?The Master of Mugham?, the most illustrious interpreter of the traditional music of Azerbaijan, considered a living legend and one of the most beautiful voices of every time of the Middle East.


The album was produced by Antonio Fraioli, a musician from long time involved in musical search between modernity and tradition and founder of the group Spakka Neapolis 55 with Monica Pinto, the singer of the band.

The mixing of the 13 songs of the album have been carried out by three different sound engineers: Marco Messina ex 99 Posse, Luigi Turaccio (already keyboardist of the group for several years), that carried out the recording sessions, and Enzo ?Soulfingers? Rizzo, producer/engineer of Mano Negra, Manu Chao, Les Negresses Vertes, Modena City Ramblers, which took care the mastering, too.

JANUS, an archaic Italic deity, depicted with two faces looking in two opposite directions, well represents the musical path and the search of this new album which tells, so intense and personal, both the tradition and the reality of our days.
The music of the new songs is written by Antonio Fraioli, who continues the search towards new sonorous plots, which sometimes are further from tradition to emphasize the images and the meaning of the texts of the songs.
Listening to this album you can meet the sound of deeps drums, impassionate voices, rage and protest, soft atmospheres, exciting melodies and rhythms from ancient Italian dances and the sound of a band parade.