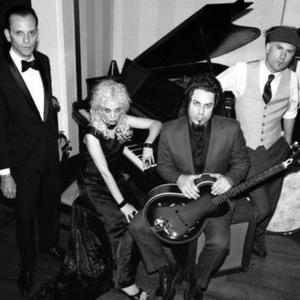 Rock City Morgue formed in New Orleans in 2002. Founding members Rik Slave (of Man Scouts of America) and Sean Yseult (of White Zombie) moved from the South to spend their formative years in New York City's Lower East Side, where their undying love for underground music bonded their friendship. After both spnet time in different bands, they later found each other in New Orleans - where they met Johnny Brashear, guitarist, and drummer Keith Hajjar, to form the group. Their self released e.p.

Some Ghouls is produced by Daniel Rey (of Ramones fame), and engineered by grammy award-winning Trina Schumaker. After receiving accolades in the press, it was recently rereleased by Antidote Records in America, K Industria Records in Spain, and Lonestar Records in Germany. Live shows across the U.S.and Europe have brought out a fast and rabid fanbase, and playing shows with bands such as the Cramps, X, and the Buzzcocks has kept them busy on the homefront.
They toured Europe, and released their album Dead man's Song produced by J.Yuenger (White Zombie guitarist and producer of Fu Manchu, Puny Humans) and Daniel Rey (ramones) in January 2005 on Nocturnal Records.
They are currently working on the new material.

The Boy Who Cried Werewolf