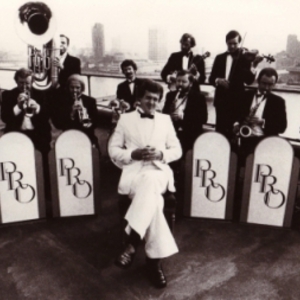 The Pasadena Roof Orchestra (commonly abbreviated to PRO) is a contemporary band from England that specialises in most genres of music of the 1920s and 1930s, although their full repertoire is considerably wider. The orchestra has existed since 1969, although the line-up has frequently changed. It has achieved success outside of the United Kingdom, most notably in Germany. The PRO was formed in November 1969 by John Arthy, a baker who moonlighted as a BBC session bass player.

The PRO was formed in November 1969 by John Arthy, a baker who moonlighted as a BBC session bass player. Arthy discovered a cache of original musical arrangements dating from the 1920s in an attic and on the strength of this find decided to form his own band. The name of the band was inspired by Harry Warren's (Home in) Pasadena. There was a strong revival movement for music of the 1920s at the time (other rival bands included The Temperance Seven); however, Arthy moved this new band in a different direction to most of the revivalists: away from humour and towards more serious, dedicated renditions of the music.

The orchestra's first vocalist was John "Pazz" Parry, an old friend of Arthy's (the two had both been members of The Water Rats Jazz Band). With Arthy as Bandleader and also performing on the double bass and sousaphone, the PRO soon grew in popularity.

The orchestra became professional in 1975. Their first LP was released in the spring and was premiered at the Midem music fair in Cannes. The orchestra followed this by touring West Germany (where the revival movement was incredibly popular) in the autumn of that year.

After John Arthy retired in 1997, it continues to tour and record with Bandleader and singer Duncan Galloway. In 2007 the Orchestra is touring europe: Brussels, Munich, Berlin and scandinavia.

Everything Stops For Tea

Lullaby Of Broadway, The Best Of The Pasadena Roof Orchestra

Rhythm Is Our Business

Take Me Back (With The Swing Sisters)