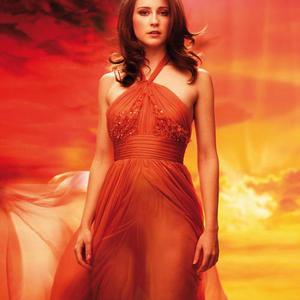 Mary-Jess Leaverland made world headlines for being the British student who won the Chinese version of the X Factor. She was voted the winner by an audience of 70 million who watched the programme, called ?I Want To Sing To The Stars.' The prize money was not the grand million pound record deal it is here in the UK, but a treasured trophy and the equivalent of ?1,000. Unfortunately she was not able to accept the rest of the prize ? to record a song written especially for her, because she only possessed a student visa. Her first chance to become a recording artist shattered at her feet.

She soared to victory singing Sarah Brightman's ?Time to Say Goodbye' and Mariah Carey's ?When You Believe', making them both her own; her voice sounding both pure and wise at the same time. It's an extraordinary voice. Mary-Jess comes from a long line of singers: her grandmother a semi-professional classical singer and her mother a powerful pop, rock and country singer.

Singing was always Mary-Jess' dream but feeling she needed to have an interesting alternative, she decided to study Chinese at the age of 12; her school offered it as an extracurricular GCSE.

?French wasn't my best subject and so I was surprised that I took to Chinese so well. It caught my attention with all the different tones. Each word had its own tune. So in a way, my musical background helped.?

Mary-Jess is 21, has a delicate fresh-faced complexion, wisdom beyond her years, looks gorgeous, speaks Chinese and is happy to demonstrate the different tones of Mandarin on demand, as she did when asked to sing live on BBC Breakfast TV, looking completely undaunted by the sudden storm of media attention. She had been studying Music and Chinese Studies at the University of Sheffield, a four-year course. For the second year, students go to China to study. She went to Nanjing. It was quite a culture shock.

?The idea of spending a year somewhere different and somewhere so far away was daunting. The tutors didn't speak English to me. Turtles and frogs were on the menus in restaurants. I was living in student accommodation. Two squat toilets and two showers for 40 girls-even when you go out to somewhere swish and modern the toilets are squat with no doors.?

Now as if this wasn't scary enough, Mary-Jess went on to sing to 70 million people. She saw the competition taking place and immediately wanted to enter. ?I went to the studios with a friend who was taking part in another TV show and walked past a studio where there was this guy was singing away to a backing track. It looked like the most exciting opportunity of my life and so I asked how I could get on the show. I was introduced to the producer and had to sing for him on the spot.

Two weeks later they called me but by that time I was really ill with the flu.

?They wanted me to come in straight away but I could hardly speak. I was heart broken. I thought I'd lost my only chance but the next day, at the university, I saw a poster for an open mic night. I thought it wouldn't matter if I wasn't very well because it was an opportunity to meet musicians, and I wouldn't have to go anywhere, but the more I spoke to the organiser, the more I realised it was far more than just an open mic night. Then she said it was on TV! It was the same show I was too ill to do!

?I felt it was like a higher power telling me, ?you're doing this.' So instead of thinking, ?I can't be croaky on Chinese TV if its my chance to be noticed', I thought, ?this might be the only opportunity to realise my dream, I should do it.' So I ran to the chemist then went live on Chinese TV and competed with other foreigners for a small prize, one of many little competitions throughout the year. After winning the foreigners competition I was invited back for the bigger X Factor style show that's held only once a year. The producer for the foreigners competition had said there was no way they were going to let me sing with Chinese contestants, but that's how it ended up.?

Through various heats Mary-Jess sang a variety of different songs to show the different colours and ranges of her voice, including O mio babbino caro, Stop by Sam Brown and Yue Guang Ai Ren. The show goes on over two and a half weeks and you have to sing live on Chinese TV every night.

?There were no mentors, no singing teachers, you were on your own but for the Chinese stylist who always wanted to curl my hair and make me look a bit whiter. Chinese people love white skin and see the West as exotic. Maybe that worked for me, although, I really thought they would want a Chinese person to win, but they voted for me. I couldn't believe it.? Mary-Jess doesn't take anything for granted. She did not grow up with a sense of entitlement. Yet she does have incredible determination and a core of self-esteem. She comes from a background where the women in her family are strong and super capable. Her mother, as well as singing all styles of music in cover bands, is a seamstress and leather worker; probably the only person in the world who has made a ball gown and a couch in the same day.

?My grandmother was a florist and a hairdresser as well as a singer because she always believed in having more than one string to your bow, which is why I worked hard at Chinese; with the current economic climate I thought it would be a good business option. She passed away when I was 13 but she was a remarkable woman. She was only in her early fifties and it was her third bout of cancer. Her twin sister had it first, and then she got it. They both recovered, and then her twin got it again and passed away. By the third time she had cancer, it had affected her throat so badly she couldn't sing any more so she started to learn the viola because she wanted still to play a musical instrument.?
It was her grandmother who got her singing started with typical determination and flare.

?She got me an audition with the Gloucester Cathedral Youth Choir. They were looking for youths aged eleven and above but I was nine. She said she wanted me to have the experience of the audition and not to worry if I didn't get in. But they wanted me! I think I've inherited my grandmother's determination, the idea that you should be extremely positive and not let anything stop you?.

?I have a treble clef necklace, which reminds me of my grandmother and all the things we might have been doing together.? That's why Mary-Jess' voice seems to reach so high, as if it's trying to touch her. The songs on the album are all a swirl of emotions. They seem familiar, catchy, yet at the same time exotic and beautiful.

?We recorded some native Chinese instruments in Beijing; a Chinese flute, a Mongolian horse-hair fiddle which is played like a cello but has a similar timbre to the viola, and a Chinese harp. You pluck the string and push it down to bend the note. We employed native players, they all sound brilliant. We also recorded some great Chinese war drums to make it more filmic and epic. When coupled with the Western instruments they are like spice in food, adding their own flair whilst bringing out the other flavours.?

After winning the competition Mary-Jess decided not to go back to her studies at the Chinese university but went back just to collect her belongings with her boyfriend, who is a world class rollerblader, and has been one out of only ten inline vert rollerbladers in the world to be invited to compete at the Asian X games.

They first met at Silverstone race track when he was doing a demo for Team Extreme and she was working at an after school job in a rock climbing centre. ?They had a mobile climbing wall. I remember thinking I wasn't going to go that day because of other commitments and Rich wasn't going either, but somehow we both ended up there.? Once again she felt a higher force governing her destiny. She was used to a long distance relationship when she moved to China because she lived in Gloucester, then Sheffield and he lived in Glastonbury and trained in Birmingham. ?Our past made it easier to get used to the separation in China because our relationship had always been long distance.? Feeling homesick or lovesick was not the reason she didn't complete her course in China. ?I never suspected the huge media storm that would happen after I won the competition. It was a whirlwind. I know people use that expression but I don't think you really know what it is until you've experienced it.? She felt that force of nature sweeping her towards her dream.

?I never wanted anything my whole life but to be a recording artist. The only reason I took Chinese was because the music business is fickle and I wanted a plan B. But, incredibly, my plan B lead to my plan A.?