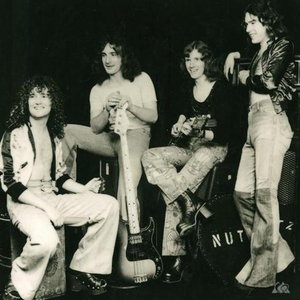 A Liverpool based group, perhaps unfortunately more remembered for their saucy album covers than the actual music the records contained. NUTZ's career highlights included support slots to UFO in 1976 and BLACK SABBATH in March 1977 and the group built up a healthy and loyal fan following across the UK. The band was initiated by guitarist Mick Devonport by drawing in drummer John Mylett and bassist Keith Mulholand. Their lead vocalist, Dave Lloyd, was located through the television.

The singer had lent his vocal talents to the theme of a Cadbury's Crunchy bar advert, this display prompting the trio to track him down. By coincidence Lloyd was performing at the world famous Cavern Club the very next day and duly persuaded to front NUTZ.

The band established a residency at the Cavern Club, recording in daylight hours and performing live in the evening. Unfortunately the A&M Records 1974 debut did not live up to expectations. 1975's 'Nutz Too' proved a much more commendable affair, blessed with a harder production, a rendition of PETE PIZER's 'Changes Coming' and a guest showing from FREE man John "Rabbit" Bundrick on the ballad 'The Love That You Lost'. Strangely, the band was put on tour in North America, despite neither album being available there, thus losing valuable impetus at home.

Their fortunes were revived with a valuable support tour to BLACK SABBATH's 1976 UK dates and a barnstorming appearance at the Reading Festival. NUTZ added keyboard player Kenny Newton in mid 1977 for recording of the 'Hard Nutz' opus. Soon back on the road, NUTZ paired up with BUDGIE for further UK dates. 'Nutz Live Cutz', issued in 1978, severing their contract with A&M. However, the record company then exercised their contract in full, not allowing the band to record for a further two years. The band members relocated to Jersey during this period.

Record producer Geoff Appleby enticed the musicians back to London and arranged a showcase gig at the Croydon Greyhound. The timing for NUTZ was perfect as Punk was being eclipsed and the NWoBHM movement was gathering strength. At that gig fabled DJ Neal Kay organised a session for the band to record the new track 'Bootliggers'. This song was duly included on the now fabled NWoBHM compilation 'Metal For Muthas', issued by EMI Records in February 1980.

The French label Carrere Records soon jumped onboard to sign the band up. Having chosen to rebill themselves as RAGE in 1980, the move made minus Newton, who had joined NIGHTWING, the band re-debuted with the 'Out Of Control' album. Newton's band mate John Mylett also contributed drums to NIGHTWING's debut album 'Something In The Air'.