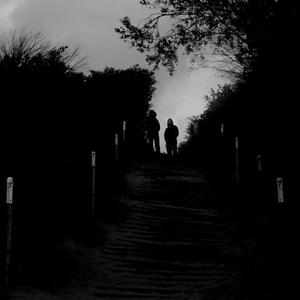 Woods of Desolation is a depressive black metal band that was formed by D. in New South Wales, Australia in 2005 as a means of much deeper personal expression/unburdening through music. Utilising the help of P. Knight on vocals (and occasionally bass) located in the UK 2005- early 2007 saw the recording of 2 demos and 2 split releases released in very limited numbers via different underground labels. These early releases explored more the idea of raw improvisation and experimenting with various different self-recording techniques to achieve the final result.

Recorded in Winter 2007, and originally planned as a 3rd demo, 2008 saw the emergence of what would become the debut full-length ?Toward The Depths?, released on CD, Vinyl and Tape via 3 different labels; Dark Adversary (Australia), Obscure Abhorrence (Germany) & Hammer of Damnation (Brazil) respectively. This release was also the last of P. Knight's contribution to Woods of Desolation.

Autumn-Winter 2008 saw the writing & recording of the ?Sorh? EP (meaning Sorrow in Modern English), a more focused and personal recording featuring Desolate of Austere on vocals on the entire EP. After some delay and problems, this was released worldwide in November 2009 as a digi-sleeve MCD by the German based label [labe]Eisenwald limited to 1000 copies. Vinyl version was released in 2010 featuring a bonus exclusive vinyl only track.

After the recording of Sorh, Woods of Desolation went on hold for sometime and it was thought another release would not eventuate.

However, D. re-commenced work again on the band and 2009 was spent writing for what would become the 2nd full-length album. Desolate could no longer particpate further in Woods of Desolation due to other commitments, but was soon temporarily replaced by [bandmember feom=2009]Tim/Sorrow[/bandmember] (of Austere/Grey Waters) on vocals with him also taking over the drumming position from D. With this line-up the band entered the studio in late February and recorded the 2nd full-length album, titled ?Torn Beyond Reason?, released on February 25th 2011 through Northern Silence Productions on CD/DIGI CD/LP, featuring a far more matured and refined sound, yet still delving further into melancholy and the esssense of personal expression through music, which has always been, and will always be, the purpose and staple ideal of Woods of Desolation.

Band founder and heart of the band; D. is now focused on writing for an upcoming 3rd full-length release in 2012, featuring a brand new line-up to be announced at a later date.