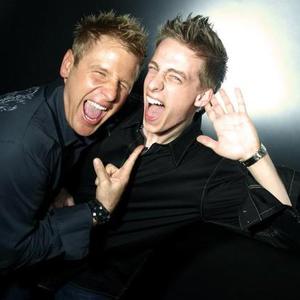 After only three short years of united production, progressive trance duo Tritonal has become one of the top names to watch in the international electronic dance music scene. Currently standing at #83 on DJ Mag's Top 100 DJs List, Tritonal has seen track after track fly up the Beatport charts and land in the sets of some of the most renowned and respected DJs in the world. In 2011, Tritonal shows no signs of slowing down?even after a whirlwind, worldwide tour to promote their debut artist album, "Piercing the Quiet.?

Chad Cisneros and Dave Reed formed this dynamic musical partnership from opposite ends of the United States after meeting online in a sound production forum. Within a year of collaboration their first smash hit, Piercing Quiet, was voted best track by listeners of Armin van Buuren's ?A State of Trance' radio show. Throughout 2011, they have provided a guest mix for Trance Around the World with Above & Beyond, became the resident DJs on Sirius XM's Electric Area, and released five top 20 Beatport singles, including fan favorites ?Lifted? and "Still With Me (Club Mix)," which feature the haunting vocals of Cristina Soto. And thanks to their popular Air Up There radio show, Tritonal has been able to reach fans around the world with their unique and euphoric sound at some of the world's best dance music events in the U.S., Russia, Asia, the U.K, and Australia.

With a fan base of dedicated Tritonians expanding rapidly around the world and a truly memorable, vivacious stage presence which must be seen to be believed, Tritonal continues to shower music lovers with their uplifting, original material and innovative remixes of some of the best electronic tracks today.

For more information on Tritonal, visit their:

Happy Where We Are (Original Mix) (With Dylan Matthew & Au5) (CDS)