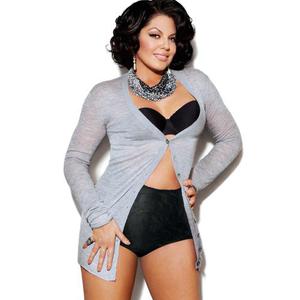 Sara Ramirez (born August 31, 1975) is an actress and singer. She won the 2005 Tony Award for Best Performance by a Featured Actress in a Musical for her role as The Lady of the Lake in Monty Python's Spamalot, and is a member of the cast of Grey's Anatomy. She can also be glimpsed as Rose, the Zabar's Cashier, in You've Got Mail, and the cop at the carjacking in Spider-Man. Ramirez was born in Mazatl?n, Sinaloa, a popular Mexican beach resort on the Pacific. Sara moved with her mother at age eight to Tierrasanta, in San Diego, CA.

Ramirez was born in Mazatl?n, Sinaloa, a popular Mexican beach resort on the Pacific. Sara moved with her mother at age eight to Tierrasanta, in San Diego, CA. After graduating from the San Diego School of Creative and Performing Arts in San Diego, California, she graduated from the Juilliard School in New York City, where she refined her skills as an alto singer.

She debuted on Broadway playing Wahzinak in Paul Simon's The Capeman (1998). In 1999, she appeared in The Gershwins' Fascinating Rhythm (1999) and received an Outer Critics Circle Award nomination for her role. She has also appeared in A Class Act (2001), Dreamgirls (2001), and she performed in The Vagina Monologues with Tovah Feldshuh and Suzanne Bertish.

Ramirez also voiced the lead character in the 1999 PlayStation video game UmJammer Lammy. She reprised her role in the 2001 PlayStation 2 game PaRappa the Rapper 2. Ramirez joined the cast of Grey's Anatomy in a recurring role as Dr. Calliope 'Callie' Torres in the show's second season. For the third season she became a series regular. On a special Grey's Anatomy themed episode of The Oprah Winfrey Show, she revealed that ABC loved her performance in Spamalot and offered her a role in any ABC show she wanted, and she picked Grey's, of which she was a fan.