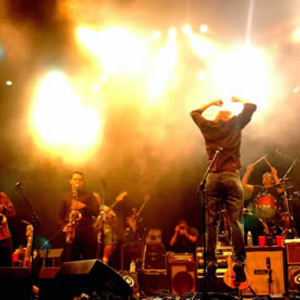 With the retirement of acclaimed resuscitators of the Jam band scene, Phish, ex-frontman Ernest "Trey" Anastasio continues to tour with his latest project, the Trey Anastasio Band (not to be confused with his other project which toured form 1999-2004), otherwise known as TAB. TAB is mostly made up of his backing band from his 2005 tour, 70 Volt Parade, including keyboardist Ray Paczkowski. While the overall feel of this band is much along the lines of Phish-style jams with Trey taking the reins while the band backs him up...

While the overall feel of this band is much along the lines of Phish-style jams with Trey taking the reins while the band backs him up, the style of the music is a little more accessible, and not as eccentric and signature as Phish songs. Using a brass section Trey brings a whole new extension of sounds to play with in the band's jam sessions.

TAB plays mostly Trey's solo material from his self title album released in 2002, 2005's "Shine", and his most recent album "Bar 17", but they've also played a number of Phish tunes.

TAB made its debut in Atlanta, Georgia, with a two night run at The Tabernacle, before keeping a low profile for most of 2006. TAB opened for Tom Petty and the Heartbreakers during the months of June and August, with one headlining show in late June at the Jazz Aspen Snowmass.

TAB took the summer off, as Anastasio reunited with former Phish bassist Mike Gordon, and toured with the Benevento/Russo Duo.

TAB will enbark on its first headlining tour in the fall of 2006, supporting Anastasio's latest solo album Bar 17.

TAB At The TAB