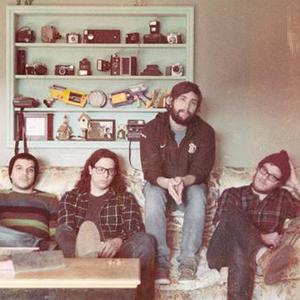 Long Island, NY ? February 18, 2011 ? The Long Island, NY rock band Sainthood Reps have recently signed to Tooth & Nail Records. The band will also be performing at this year's SXSW Festival in Austin, TX at the Tooth & Nail Showcase on March 19th at Bat Bar. As 2010 drew to a close, the band partnered with Tooth & Nail Records to begin working on their debut full-length, produced by Long Islander Mike Sapone (Brand New, Crime in Stereo, The Xcerts) and slated for release in 2011.

As 2010 drew to a close, the band partnered with Tooth & Nail Records to begin working on their debut full-length, produced by Long Islander Mike Sapone (Brand New, Crime in Stereo, The Xcerts) and slated for release in 2011.

Sainthood Reps began when Francesco Montesanto created and recorded four demos and showed them to his longtime musical companion, guitarist Derrick Sherman. Knowing that he was unrefined, Montesanto hoped to entice Sherman into joining his musical endeavor because of his experience and similar musical interests, and thought he could turn his project into something worth pursuing more seriously.

And in the frigid winter of 2009, Montesanto and Sherman joined by Bradley Cordaro and Jani Zubkovs, picked up their collective instruments, plugged them in, and made noise together for the first time; thus Sainthood Reps was born.

Their goal was simple. They shared many favorite bands such as Mogwai, Fugazi, Explosions in the Sky, Sunny Day Real Estate, Modest Mouse, Jesus Lizard, and Built to Spill, and wanted to form a band that was influenced by those bands in every aspect, from live performance to studio recordings and everything in between.

After just a handful of practices, they packed up their van and delved into an unseasonably warm Midwestern winter to play their debut show as a band in Detroit, kicking off a tour with All The Day Holiday. The band quickly hit the road again just three days into 2010 with Caspian, refining their sound as well as their personal relationships with one another. Another tour followed in the summer of 2010 with the Felix Culpa, along with constant short tours with Long Island friends The Sleeping, and Philadelphia friends Balance and Composure.