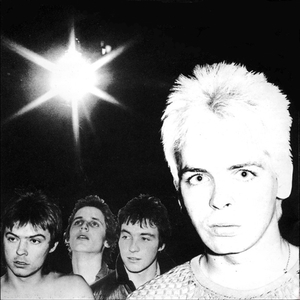 Tubeway Army were a London-based punk rock and new wave band led by lead singer Gary Numan. They were the first band of the post-punk era to have a synthesizer-based hit, with their single Are 'Friends' Electric? and its parent album Replicas both topping the UK Album Chart in mid-1979. Aged 19 years, Gary Webb had fronted London band Mean Street in 1976 (their song "Bunch of Stiffs" appeared on the Live at the Vortex compilation, and was the B-side of the Vortex 7").

Aged 19 years, Gary Webb had fronted London band Mean Street in 1976 (their song "Bunch of Stiffs" appeared on the Live at the Vortex compilation, and was the B-side of the Vortex 7"). Leaving this band acrimoniously, he auditioned as lead guitarist for another band called The Lasers, where he met bass-player Paul Gardiner. The pair left The Lasers soon after and formed Tubeway Army, initially with Webb's uncle Jess Lidyard on drums. Webb rechristened himself "Valerian", Gardiner "Scarlett" and Lidyard "Rael".

Webb was a prolific song-writer and ambitious for commercial success. The band began playing gigs on the punk scene in London and managed to secure a record deal with the independent Beggars Banquet label. They released two guitar-heavy, punk-style singles in the first half of 1978 ("That's Too Bad"/"Oh! Didn't I Say", and "Bombers"/"Blue Eyes"/"OD Receiver"). These failed to chart.
Soon afterwards, the Tubeway Army album was released on blue vinyl, at which point Webb adopted the name "Gary Numan". Allegedly, Numan actually took his new pseudonym from a local Yellow Pages where a plumber called "Arthur Neumann" was listed, the singer abandoning the German spelling, to become Numan. Whilst still largely guitar/bass/drums-based, the album saw his first tentative use of the Minimoog synthesizer, which he had come across by accident in the recording studio during the album sessions. Lyrically the record touched on dystopian and sci-fi themes similar to those employed by authors such as Philip K. Dick, of whom Numan was a fan (the opening lines of the song "Listen to the Sirens" are a direct lift from the title of Dick's book Flow My Tears, The Policeman Said). Whilst the album's modest initial pressing (which included a large batch of warped editions) sold out, it did not enter the album charts at that time, and no singles were lifted from it. By this time Tubeway Army had decided to abandon live shows ? Numan was unhappy with pub-venue gigs on the often violent London punk scene (the only known recording of a Tubeway Army concert ? a London show from February 1978 ? was released as a bootleg album in the early 1980s. It was later officially included under the title Living Ornaments '78 as bonus tracks on the 1998 CD re-release of the Tubeway Army album).

Following swiftly on in early 1979, excited by the possibilities of synthesizers, Numan took Tubeway Army back into the studio to record a follow-up album, Replicas. The result was more synth and science fiction orientated than the last album. The first single from the album, the bleak, slow-paced keyboard-driven song "Down in the Park", failed to chart. However, the next single, "Are 'Friends' Electric?" was more successful. A special picture-disc helped boost sales but what particularly grabbed the British public's imagination was Tubeway Army's appearance on the BBC show The Old Grey Whistle Test, followed soon after by a slot on Top of the Pops. The band appeared all dressed in black and near-motionless, Numan in particular giving a performance often referred to as being "like an android" (a style that was later reported to have been a means of covering stage nerves but which then became his trademark). The single climbed steadily to stay at number one in the UK charts for 4 weeks, with Replicas following suit in the album charts. With Tubeway Army still avoiding live shows, Numan recruited some additional musicians to make these television appearances (see above).

Numan became the first synth-based artist in Britain to break through into major commercial success. At this point, he dropped the Tubeway Army name and subsequent releases were made under the artist name Gary Numan.