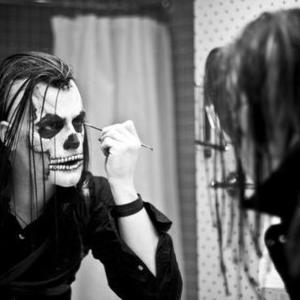 Michale Graves blasted onto the music scene in 1995 as the lead singer of one of the most legendary punk rock bands of all time, The Misfits. The band soon kicked off an explosive tour of Europe and the United States dubbed "Resurrection". Soon after Michale and the band signed a recording contract with Geffen Records through the same A&R representative who signed Metallica and White Zombie. American Psycho was the first Misfits release in almost twenty years. Michale composed the majority of the songs on the album including both singles.

The Misfits then embarked on a grueling world tour with one of the biggest heavy metal acts on the planet, Megadeth.

The band shot two music videos. For several weeks The Misfits "American Psycho" video was listed on the Sonicnet chart at #2, bookended by Backstreet Boys videos at #1 & #3. Over all the "Psycho" video remained in the Top 5 for nearly a year while videos from many chart-topping acts quickly came and went. Matt Pinfield premiered "Dig up Her Bones" on MTV's 120 minutes. Both videos have been repeatedly on the top of the charts, listed as the "most downloaded videos on the net" with online outlets like Sonicnet.

The Misfits next release was a live album entitled, Evil Live II. It was a collection of live songs taken from shows on the relentless and very successful American Psycho tour, along with a limited edition glow-in-the-dark 45 covering the classic song "Monster Mash".

October 1999 marked a second studio album called Famous Monsters released by Roadrunner Records. Upon conclusion of the Famous Monsters world tour at The Mt. Fuji amphitheater in Japan with Marilyn Manson, Japan's premier rock-n-roll publication Burrn Magazine voted Michale Graves "Vocalist of the Year" and his song "Crying on Saturday Night" "Song of the Year". In that time, The Misfits also released their third video for the song "Scream" that was written by Michale. The video was directed by George Romero, the same man who directed "Night of The Living Dead". Michale and the band appeared in Romero's film "Bruiser" performing "Fiend Without a Face" which was also penned by Graves specifically for Romero's film. Famous Monsters went on to become the biggest selling title ever for Roadrunner Japan.

Michale continued to tour as usual aside of the off days that The Misfits spent appearing and wrestling on Ted Turners' WCWs' Monday Nitro, Thursday Thunder and a pair of pay-per-views. He also appeared in WCW Magazine including a centerfold and exclusive write-up about the band and their wrestling partner Vampiro.

Roadrunner Records followed up Famous Monsters with a wonderful package of previously unreleased studio demos and out takes from the bands beginning in 1996 until 2001 called Cuts from the Crypt.

In April of 2003, Michale embarked on a new project called Gotham Rd. Gotham Rd. has played hundreds of dates on the U.S. club circuit performing and promoting a seven song EP that bears the same name as the band. In May of 2003 NJs' premier college radio station, 89.5fm WSOU, Seton Hall's Pirate Radio Station, charted the band at #30 after only several days of rotation. The bands single entitled, "Seasons of The Witch" shot to number 2 and held steady for weeks.

Upon completion of that tour Michale put together a short film entitled "The Blackness And The Forest" that told the story of his "Almost Home Campaign" and the work he continues to do for The West Memphis Three.

Partnering with SOS Records in 2007, Michale released "Illusions" featuring five songs with lyrics written by Damien Echols. A national acoustic tour soon followed to rave reviews. Also in 2007, Graves got together with Gotham Rd. for a set at HorrorFest in Dallas, TX, and Michale also had a booth at NJ's Chiller Theater. There he met up with Craig Singer, director of the first feature film that Michale appeared in with The Misfits called "Animal Room". They stayed in touch, and when a part came up in a film entitled Perkins 14 directed by Craig in 2008, he suggested Michale audition for a main role in the movie, which he received. Perkins 14 was filmed in Romania and is set to be released as part of HorrorFests "8 Films to Die For" coming out this fall. His original song from 2002's Web of Dharma release entitled "Blackbird" was re-recorded for the film, and is used in Michale's opening scene.

In Romania, Michale recorded demo versions of new songs written and inspired by his experience filming Perkins 14. Those demos, along with live tracks from the acoustic Illusions tour will be released in October 2008 on Screaming Crow Records, while Michale is on another national acoustic tour in support of Illusions as well as this new release entitled "Illusions Live/Viretta Park".

Demos And Live Cuts, Volume I