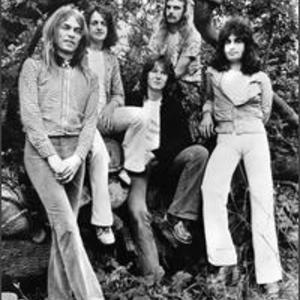 It has always been said that the origins of the Patrick Moraz debut recording group "Mainhorse" are not well documented. Now, with the discovery after 37 years of 'The Geneva Tapes' all that has changed. These tapes provide a unique insight into how the band was formed and what its original aims and personnel were. In the late summer of 1969, Moraz and his friend, bass player and cellist Jean Ristori came over to England in search of an English rock drummer and singer. After putting an advertisement in Melody Maker they hired a rehearsal room in Shepherds Bush, London for 2 days.

In the late summer of 1969, Moraz and his friend, bass player and cellist Jean Ristori came over to England in search of an English rock drummer and singer. After putting an advertisement in Melody Maker they hired a rehearsal room in Shepherds Bush, London for 2 days. On the first day they auditioned drummers and chose a then unknown 17 year old Bryson Graham. The 2nd day was spent listening to singers and finally the choice was reduced to 2. The singer from that great band "If" and cult rock figure David Kubinec aka 'Kubie' from pop-psych band "The World of Oz". Finding it impossible to decide between them, they were given an exam in which they both had to write lyrics for 'Pale Sky' in 10 minutes but Kubinec raced through it in 3 or 4 and they can be heard here in their entirety for the 1st time. And so Kubie was chosen. These 4 guys then flew over to Switzerland and joined up with Auguste De Antoni the renowned French jazz guitarist and Swiss jazz drummer Arnold who were part of The Patrick Moraz Quartet which had already played to great acclaim at The Montreux Jazz Festival, forming a 6 piece group with 2 drummers with differing styles which Moraz named "Integral Aim". However, after 3 months Arnold left to get married but the group continued as a 5 piece, rehearsing every day and night when they weren't gigging. At this stage, David Kubinec decided that the name of the band was so dire it had to go and he renamed it "MAINHORSE AIRLINE" with the approval of Sam Miesegaes, a Dutch millionaire living in Switzerland who had a financial stake in the group and who was also to be responsible for kick-starting "Supertramp" a few months later with a cash injection of over ?60,000, a fortune in 69/70. In fact "Supertramp" became the warm-up band for MAINHORSE AIRLINE in the early days of "MHA" when they themselves weren't supporting the likes of "Free", "Humble Pie" and "Canned Heat".

The atmosphere in the basement studios of MHA was of a hothouse intensity with track after track being laid down on a row of Revox tape recorders linked together and Ristori or Kubinec leaping forward to flick a switch or adjust a volume control depending on who was free to move about, the whole group driven on by the obsessional force of Moraz and Kubinec who combined to produce material of total originality, with the youthful enthusiasm of Bryson Graham pushing them hard as can be heard on these fantastic tracks.

Because there was no direct injection into a mixing consul they used open mikes, giving a feeling of an almost live performance; in fact at the end of the 1st line of the last verse in 'Pale Sky' the sound of breaking glass can be heard which was Bryson kicking over an empty wine bottle! If the listener closes their eyes they will be almost able to imagine being there, sitting right in the middle of the group.

Although some of the tracks made it through to be recorded the following year on Polydor and Mainhorse they mostly lacked any lyrical or vocal content because David Kubinec, who had been working at a ferocious pace non-stop for over 4 years, first in Germany with "The Pieces of Mind" playing keyboards 4 or 5 hours a night, 7 days a week of R'n'B and Soul and then as organist with "The World of Oz" for who he wrote the multi-million seller 'The Muffin Man' amongst others, woke up one morning in a hospital in Geneva with no idea how he'd got there. In fact, he'd collapsed at Sam Miesegaes' villa with a heart attack brought on by sheer exhaustion and was in no condition to continue. After 2 weeks rest the Doctors gave him permission to travel and Sam flew him back to England in his private jet. Auguste, disheartened after all the many months of hard work the group had put in called it a day. A friend of Bryson's, guitarist and singer Peter Lockett was drafted in to replace both Kubie and Auguste, but the spark had largely gone out of the enterprise which makes the emergence of these original tapes all the more exciting.

An innovative project of free jazz, rock, psychedelia, pop and classical fusion which filled the gap between Underground and Prog-Rock that would have taken the world of music by storm had David Kubinec not burned himself out with the effort and Auguste stayed on, was over.

This album is a must for any fan, young or old of what was to become known as Prog-Rock, laying down as it did one of the foundation stones for that genre and yet these particular recordings have never been heard before. A truly fabulous and unexpected find that shines a light into the dark corners of late 69 and early 1970 experimental music and blazing a trail for others.

Moraz went on to play with "Refugee", "Yes" and "The Moody Blues" adding several albums of his own when he left them after 15 years. David Kubinec recorded solo albums and also LP's with "The Rats" and John Cale, while Bryson Graham teamed up with Gary Moore, Spooky Tooth and The Paul Kossoff Band and was with Paul when he died on the plane coming back from the States. He rejoined Kubie in "DAVID KUBINEC'S EXCESS" in 1978 to promote Kubie'' A&M LP "Some Things Never Change" with Chris Spedding Ollie Halsall and John Cale till Kubie went to Yugoslavia and joined "Stienje" a rock band which enjoyed national success before the Balkan Wars.