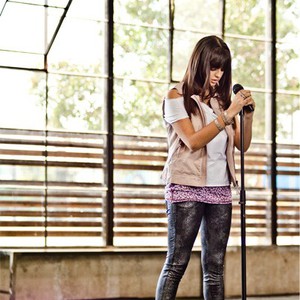 Rebecca Black (born June 21, 1997) is an American pop singer who gained worldwide attention with her 2011 single "Friday". Her mother paid $4000 to have the single and an accompanying music video put out as a vanity release through the record label ARK Music Factory. The song was co-written and produced by Clarence Jey and Patrice Wilson of ARK Music Factory. After the video went viral on YouTube and other social media sites, "Friday" was derided by many music critics and viewers, who dubbed it "the worst song ever.

The music video, uploaded to YouTube, has received more than 160 million views, causing Black to gain international attention as a "viral star". The song was released as a single and made the Billboard Hot 100 and other charts.

Rebecca Black was born on June 21, 1997, in Anaheim Hills, California. She is the daughter of John Jeffery Black and Georgina Marquez Kelly, both veterinarians, and is of Spanish, Italian, Polish, and English descent. An honor student, Black studied dance, auditioned for school shows, attended music summer camps, and began singing publicly in 2008 after joining the patriotic group Celebration USA.

In late 2010, a classmate of Black and music-video client of ARK Music Factory, a Los Angeles label, told her about the company. Black's mother paid $4,000 for Ark Music to produce her daughter's music video while the Blacks retained ownership of the master. The single, "Friday", written entirely by Ark, was released on YouTube and iTunes. The song's video was uploaded to YouTube on February 10, 2011, and received approximately 1,000 views in the first month. The video went viral on March 11, 2011, acquiring millions of views on YouTube in a matter of days, becoming the most-talked-about topic on social networking site Twitter, and garnering mostly negative media coverage. As of June 14, 2011, the video had received more than 3,190,000 "dislikes" on YouTube compared to more than 451,000 "likes". As of March 22, 2011, first-week sales of her digital single were estimated to be around 40,000 by Billboard. Black appeared on the March 22, 2011 episode of The Tonight Show with Jay Leno, during which she performed the single and discussed the negative reaction to it. The song has peaked on the Billboard Hot 100 and the New Zealand Singles Chart at number 58 and 33, respectively. In the UK, the song debuted at number 61 on the UK Singles Chart.

In an interview with The Sun, Black said that she is recording a new song for possible release as a single. She is currently working without a record deal. She also said that she is preparing materials for her debut album at Flying Pig Productions studio in Los Angeles containing songs with themes similar to that of "Friday", as she wants it to be "appropriate and clean." Black teamed up with Funny or Die on April Fools Day (the site was renamed Friday or Die) for a series of videos, including one which addresses the controversy about the driving kids in her music video, stating "We so excited about safety." She has also stated that she is a fan of Justin Bieber, and expressed interest in performing a duet with him.

In response to the YouTube video of "Friday", Black began to receive death threats in late February 2011, specifically by phone and email. These threats are being investigated by the Anaheim Police Department.

As an homage to "Friday", Black appears in the music video for Katy Perry's "Last Friday Night (T.G.I.F.)", in which Black plays along side Perry as her best friend.