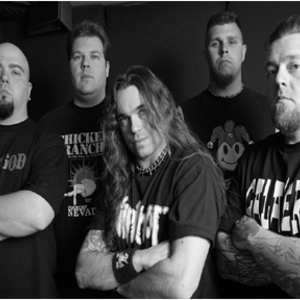 LUPARA was formed in the summer of 2003 by guitarist Jeremy Wagner. Wagner, best known as the founder and chief-songwriter/lyricist and rhythm guitarist for BROKEN HOPE, decided to put all of his energy into a new project after his original band dissolved. Wagner took the name LUPARA from his fascination with the Sicilian mafia and the novel, "The Godfather." A "lupara" is a sawed-off, Sicilian shotgun that mafia soldiers of old carried as one of their primary weapons. A lupara was rumored to be so powerful, it can blow a man in half.

Wagner took the name LUPARA from his fascination with the Sicilian mafia and the novel, "The Godfather." A "lupara" is a sawed-off, Sicilian shotgun that mafia soldiers of old carried as one of their primary weapons. A lupara was rumored to be so powerful, it can blow a man in half.

Since January 2005, LUPARA released a critically-acclaimed promo-CD, and performed throughout the U.S. and out of the country with Obituary, Napalm Death, Dead to Fall, Otep, American Headcharge, Testament, God Forbid, Nuclear Assault, Agnostic Front, and many others. LUPARA were also chosen as the only unsigned American metal act to perform at the 2005 Monterrey Metalfest in Mexico with Motorhead, WASP, Hammerfall, Danzig, and Jag Panzer.

Regarding the deal with Crash Music, Jeremy Wagner had this to say, "Mark Nawara of Crash Music was the first man on the planet who had the guts to sign BROKEN HOPE in 1990 to Grindcore International Records when no one wanted us. Grindcore was the company who released our classic debut, ?Swamped In Gore'. After that, BROKEN HOPE went on to a decent career with Metal Blade Records. Now, after shopping to various labels for the last year, Mark Nawara is working with me again. Crash Music stepped up and gave us a great offer and opportunity to take a bigger step into this world known as the metal music industry. Their vision and belief in LUPARA is more than an indie metal band could ask for."

Crash Music's Mark Nawara comments, "We are very excited and pleased to be working with Jeremy Wagner and LUPARA. Jeremy has proven over the years that he has what it takes to be successful in this business. Once I heard his new project, I knew I had to be involved. I look forward to a long and successful relationship with LUPARA".

Regarding what fans can expect from the debut LUPARA album, Wagner says, "Well, I'm sure as hell am not gonna say it's going to be the next 'Master of Puppets', as a number of bands seem to be fond of saying nowadays, but I will say that after working with pre-production for a while, this could will be one of the heaviest, most abrasive, and relentless metal albums of 2006. I'll fucking guarantee that statement with every fiber of my being?so look out!"

LUPARA expects to begin recording their debut album sometime in May. The band will record at Mercenary Digital Studios with Scott Creekmore and the band producing. Also, LUPARA has already commissioned Mnemic guitarist, Mircea Gabriel Eftemie to create the album-cover artwork for the debut. Crash Music is looking to release the album this fall!
taken from: http://crashmusicinc.com/crashnews.html