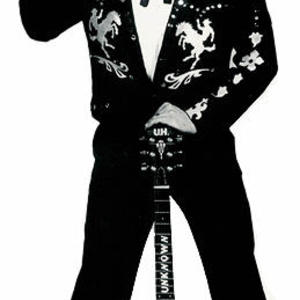 Who is UNKNOWN HINSON? He's a sociopathic, gun-totin', ex-con redneck (charges include three counts of murder one, 19 paternity suits and random grave-robbing offenses) who's purported to be a 400-year-old vampire. He's a former carnival geek whose midway specialties were biting the heads off "certain barnyard fowls" and lifting 50-pound weights with his tongue. He boasts many grand titles, not the least of which are "Chart-Toppin' King of Country & Western Troubadours Ordained" and, most importantly (to him), "God's Gift to the Womerns.

Oh, and one more thing: Unknown Hinson has previously gone on record as swearing that Hank Williams, Jimi Hendrix and the Beatles downright stole most of their hits from him. "Them boys owe me hundreds!" One thing many don't know about Unknown, is that
he has a lethal tattoo. If you see this par-tickler tattoo, you have moments to live.

The Future Is Unknown

The Future is Unknown...

Rock And Roll Is Straight From Hell