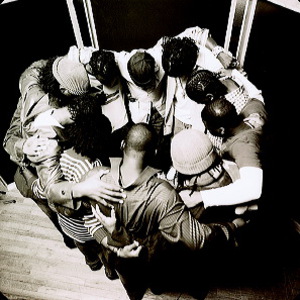 Tye Tribbett born January 26, 1977 in Camden, New Jersey is an American gospel music singer, songwriter, keyboardist, choir director and founder of the Grammy-nominated and Stellar-Award winning gospel group Tye Tribbett & G.A. (short for "Greater Anointing.") Tribbett's mother was choir director of El Bethel Church of Christ in Camden, New Jersey, and his dad was the pastor. Also, being a keyboard scholar at an early age, little Tye knew notes on the piano before learning the alphabet.

Tribbett's mother was choir director of El Bethel Church of Christ in Camden, New Jersey, and his dad was the pastor. Also, being a keyboard scholar at an early age, little Tye knew notes on the piano before learning the alphabet. During his teenage years, Tye played for various community choirs like Steve Middleton and the Tri-State Mass Choir of the Edwin Hawkins Music & Arts Seminar.

Tye Tribbett & G.A. have collaborated with a variety of notable artists, including Faith Hill, F.O.C.U.S., Mary Mary, Jessica Simpson, Justin Timberlake and Sting. The group's first high-profile performance was on DreamWorks motion picture soundtrack for The Prince of Egypt (see contemporary gospel-centric soundtrack The Prince of Egypt (Inspirational)) as Tyrone Tribbett and Greater Anointing. Their song "Let Go, Let God" was performed with the then-unknown gospel duo Mary Mary. The group went on tour with Faith Hill after impressing her whilst singing back-up at The Prince of Egypt premiere. This gave them the opportunity to perform at various award shows and television shows, including Saturday Night Live and The Tonight Show with Jay Leno.

In 2002, the group got its proper debut after signing with Columbia Records/Sony Gospel and releasing the album Life on June 8, 2004. The album, produced by neo-soul mainstay James Poyser, and included such songs as "No Way" and "Everything". Life also included a rare turn from gospel jazz singer and labelmate Kim Burrell on "You Can Change". A string of performances at various award shows built the group's popular reputation of high energy praise and worship.

During preparations for the live recording of their second album, Tye and his fellow members of G.A. were hit with the news of deaths of one choir member and two others close to the choir, all within the five months leading up to the live concert recording. Rather than cancel or postpone the recording, the group turned to prayer and persevered with their preparations.

The December 2005 concert was released as the album Victory Live! on May 23, 2006 by Columbia Records with a DVD also from Columbia Records released on September 9, 2006. In December 2006, Victory Live! was nominated for a Grammy Award for Best Contemporary R&B Gospel Album. Its title track "Victory" was nominated as well both for Best Gospel Song and Best Gospel Performance.[2]

The group has had many performances on the BET Awards, the NAACP Image Awards and the Stellar Awards.

On Friday, November 30, 2007, Tye performed at the Experience Concert in Lagos, Nigeria alongside Don Moen, Cece Winans, Kurt Carr, Israel Houghton and a host of others. The concert was organized by the House on the Rock Church.

Tye's third album with G.A., Stand Out was recorded live at the Rock Church International,in Virginia Beach, Virginia in August of 2007 and was released in May 2008 and the DVD was released in November 2008.

Tye Tribbett has not forgotten the importance of supporting education as he prepares for an outdoor gospelfest in Florida's capital city of Tallahassee. Tribbett and Mali Music will be featured at Tallahassee Community College on June 18, 2011.