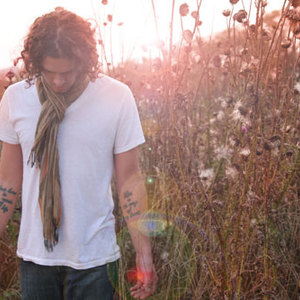 There's a bumper sticker that suggests the meaning of life is to live it. Obvious, perhaps, but how often are we really fully engaged; reveling in the highs, crying out through lows, and daring to ask questions or speak our true feelings amidst wonder, fear, and mystery? Young but uniquely experienced, Phillip LaRue has an admirable grip on how to live, and the proof is written all over his debut solo album, Let the Road Pave Itself.

Young but uniquely experienced, Phillip LaRue has an admirable grip on how to live, and the proof is written all over his debut solo album, Let the Road Pave Itself. An organic set of songs for the digital age, it was tracked live in the studio to an old fashioned two-inch tape reel, warmly capturing the sound of Phillip and his friends playing real time rock that's only ever concerned with life's deepest matters of love and faith. ??Most everything else can take care of itself.??Phillip's path began in California. An athlete until sixteen, he picked up the guitar after getting sidelined by mononucleosis. Without premeditation, his new interest turned into a duo with his sister, Natalie, and they scored a record deal in Nashville where the family was about to relocate from Arizona. Three albums and four years of touring followed.???I grew up on the road at that point,? recalls Phillip. ?It was strange having people look up to me who were twice my age, but a fun way to see the world and find my true faith in the process.?

LaRue, as the group was known, charted several pop hits and called it a day after Natalie wed. Phillip moved to Florida and produced notable indie acts like Over the Rhine and Dave Barnes for a worship project based on the Psalms. Now back in Music City, he has recently written and produced rising band Tenth Avenue North and penned a hit for Brandon Heath while pondering his own return to upfront artistry.

?I had always considered the solo thing but wanted it to be completely authentic in its expression,? he says. ?So much music is focus-grouped to death for fear of not being successful, and that's a tough place to be creative from. I'm fortunate to have found a label that said, ?You do what you do, and we'll do what we do.' That was my goal: to make a vulnerable record of my experiences that finds its way to wherever God wants it to go.???Let the Road Pave Itself does indeed have an honest, freewheeling spirit that instantly sets it apart from the big machine. Catchy without trying to sound commercial, Phillip writes stay-in-your-head songs from the heart; real life musical stories about open-book faith, his closest loved ones, and struggling friends who don't always believe as he does.??The album dawns with ?Chasing the Daylight,? a stirring mid-tempo rocker that has seen dark times but still declares I want to chase the daylight like it's the last day of my life.

?It's in the unraveling of life that we find God even more,? Phillip says of the ultimately soaring song that matches the integrity of great writers like Neil Finn and David Gray.

Continuing to build his theme, the anthemic ?Home? declares you only have one life to try to find out what it means to be alive as Phillip tries to point a frustrated soul searcher toward something more concrete than the hectic city streets. On ?Erase and Rewind,? a billowing melodic piece reminiscent of Snow Patrol, another buddy's admission of suicidal thoughts further tests the singer's resolve.

?It broke my heart that he'd lose sight of the value of his life, his identity in God,? LaRue confesses. ?It left me wishing we could simply go back to the way it used to be. I just want him to know that he's loved.?

A different type of love takes center stage on ?Don't Be Deceived? as Phillip serenades his wife (also the muse of ?Sleeping Beauty? and ?All I Want?). Waxing philosophical about their older years and begging her to stay with him, come what may, he reminds her all we have is this life, love. You know it's more than enough. The performance brings out the finest charms of Let the Road Pave Itself. Musicians Tyler Burkum (guitar), Cason Cooley (keys), and Will Sayles (drums) play to match the country soul-tinged ballad's raw emotions led by Phillip's unvarnished vocalizations, comparable to other pleasingly imperfect singers like Counting Crows' Adam Duritz or The Verve's Richard Ashcroft.

?I miss the vocal nuances I used to hear in the music my parents would put on at home,? he says. ?You feel what they're singing. That's another reason I wanted to record live with a band and keep a lot of first takes without fixing them up. The songs are here as they really happened. The whole process was a beautiful collaboration. As the songwriter I may have been holding the paintbrush, but everyone helped choose the colors.???For all these immediate songs on Let the Road Pave Itself, the most talked about tracks may ultimately be the commercially indifferent ?Black and Blue? and ?Mountains High and Valleys Low? for their unflinching takes on humanity and the heavenly.
?The former was written by Phillip after reading a poem his sister, Natalie, wrote about their younger sister, Brianna, who has cerebral palsy and now an inoperable brain tumor. With duly poetic lyrics and equally emotive accompaniment, it says you deserve to walk to run to fly?all the things I wanted for you in this life.

?It's crazy how we feel obligated by our beliefs to explain everything,? Phillip says. ?We can't always do that. Brianna's situation doesn't match up; I can't connect the dots. But I still believe and have a hope for her. And she has impacted more people than I ever will.?

?Mountains High and Valleys Low? closes the album by summing up life itself, an unassuming epic of doubt and faith whose words literally go from I long to believe to I believe. ?
?I liked ending the record with that because it applies to all I've been singing about?faith, love, life?in a way that is vulnerable, sometimes broken, but always hopeful. I really want people to hear that honesty. If they don't, what's the point??

Right there is the lasting appeal of Let the Road Pave Itself, an album unintentionally named by a friend who was convincing Phillip LaRue to share his personal yet universally relevant songs with the world once again after years outside the spotlight.

?I'm stepping back into this world, and I could care less about some of the details,? he says. ?As far as being popular, I've kind of tasted and seen that. I still want great things to happen, but more importantly I just want to be me in the process. I still believe in the power of music and want people to find hope through this record. If I can throw a rock and make another ripple, then what a blessing.?

Let The Road Pave Itself