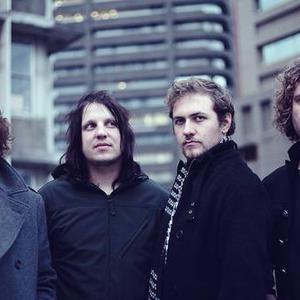 aKING is a melodic pop-rock band hailing from the suburb of Bellville in Cape Town, South Africa. They were formed when Hunter Kennedy and Jaco Venter from Fokofpolisiekar, teamed up with friends Laudo Liebenberg and Hennie van Halen, combining their their creative forces in making music that expresses their shared experiences and influences. aKING is an audio diary of life and survival in the suburbs. Expect uncompromising, focused energy.

aKING is an audio diary of life and survival in the suburbs. Expect uncompromising, focused energy. Sing-along alternative country-inspired songs and classic rock anthems are at the order of the day. The tongue-in-cheek and cynical, yet sometimes sentimental lyrics are mixed with an infectious, positive energy to accurately describe the strange contrast of their unique socio-political situation. aKING is a band with unlimited aspirations, but totally aware and in-tune with where they come from.

Being members of Fokofpolisiekar, Hunter Kennedy and Jaco Venter need no introduction to the South African Music scene. Fokofpolisiekar has revolutionized Afrikaans rock music by challenging and shifting rigid Afrikaans mindsets. Controversial as they are perceived to be, Fokofpolisiekar has written themselves into the history books of Afrikaans Music with their fiery reign of excellent musicianship, relevant intelligent lyrics and larger than life live performances. FPK has won numerous awards including a SAMA for Best Afrikaans Rock album for ?Swanesang? and they have opened commercial doors for Afrikaans rock music by being the first Afrikaans band to have tracks play-listed on national commercial radio station 5fm.

Hunter, who wrote most of the lyrics for Fokofpolisiekar, co wrote 8 of the tracks on the aKING album with vocalist Laudo Liebenberg Bassist Hennie van Halen has known the rest of the band since high-school. He studied for two years after school and worked in the sound industry for a while before leaving to spend some time overseas as an English teacher in China. On his return from abroad he lived in the Fokofpolisiekar house while the band was away on tour ? and it was in this time that he started jamming and writing songs with Laudo. Laudo Liebenberg studied Drama at the University of Stellenbosch and is best known for playing the lead role in Marthinus Basson's acclaimed productions of Romeo and Juliet and Broers.