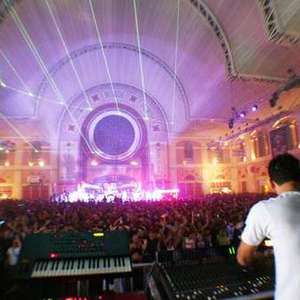 Astrix's musical agenda is the ultimate clash, where underground vs. mainstream transforms to uplifting Trance composed with sophisticated melodies, a sprinkle of progressive House, and some occasional vocals. This audio clash is where Astrix's music have emerged from & been embraced by hundreds of thousands across so many nations and continents. As an incredibly popular DJ and producer, Avi Shmailov, aka Astrix, always thinks ahead how to tailor his sets and productions for his devoted fans, but not forgetting to please the casual dancers.

Astrix needs to connect with everyone in the crowd, those who are unfamiliar with his works and at the same time with his followers throughout the years.
Rewind back to 2002, Astrix is signed to leading label HOMmega and is introduced to the world with his debut album "Eye To Eye". Things started to roll for Avi Shamilov from that point on, the world wide scene fell captivated with his unique, smart melodic style. Touring massively after the "Eye To Eye" album release didn't leave much studio time for Avi, it took two years to write & perfect his 2nd album, "Artcore" which came out in 2004. "Artcore" raised the bar with groundbreaking achievements if in CD sales, tracks used in movies, video games and TV commercials.
Once Astrix's musical sound got familiarized as his trademark, he turned to invest the years after to developing his DJ persona. Compiling & producing for leading brands such as: "Nu-clear Visions of Israel" (Tip/2003), "Psychedelic Academy" (Hit Mania/2005) and "Astrix & Friends" (DJ mag/2007). In 2009 Astrix's label, HOMmega productions, was the first to release an Astrix digital artist album, on a compact stick flash drive format, "One Step Ahead" (HOMmega/2009)
Evolving into one the world known DJ MAG TOP 100 DJs placed Astrix on the roads for an almost nonstop world wide tour. He rocked festivals across the globe including Dance Valley, SW4, Creamfileds, Love Parade, UAF, Skol Beats, Planeta Atlantida and headlined nights in the best clubs and venues such as Alexandra Palace, Brixton Academy, Pacha, Ministry of sounds, The City, Volume, Nox and so many more which he visited repeatedly .
Over the last couple of years, studio time was a rare commodity for Avi Shamilov, but never the less he always managed to find the extra hours to work on his 3rd studio album for HOMmega. ?Red Means Distortion' is the result of some very late night sessions, everything to reach the perfection he needs to return back to those who were waiting patiently for his 3rd studio album.
More Information about Astrix, shows schedule, videos and much more: