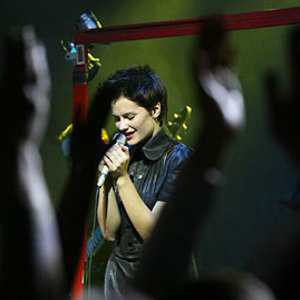 Jurga was born in 1980, Tel?iai, Samogitia, Lithuania. She started her solo career successfully by releasing her debut album Aukso Pieva (Golden Meadow) back in 2005. The first single from this album was Nebijok (Don't Be Afraid) and charted at Number One for 8 weeks and became the biggest hit single of 2005 in Lithuania. Released in September the album Aukso Pieva now is close to platinum sales (20,000 copies).

The debut album includes 12 songs in Lithuanian and English, almost all of them were written by Jurga herself. Shortly after this, Jurga received many Lithuanian awards such as Best Debut, Best Song, Best Album, Best Female Artist and Song of the Year.

Being an artistic and original performer, Jurga received warm welcome from the audience immediately and has performed more than 120 sold-out concerts with her live band all around the country and in neighbouring countries such as Latvia.

The end of 2006 marked the international release of Jurga's songs on internet services such as Amazon, iTunes Music Store, Napster, eMusic, Virgin Mega, Sony Connect and others.

On April 19th, 2007 Jurga's second album called Instrukcija (Instruction) was released. It includes 13 brand new tracks, again written and arranged by Jurga alone (with some help from other famous lithuanian musicians like Viktoras Diawara from Skamp and Mario Basanov). The album release was supported by a sell-out tour across Lithuania and a visit to Anaberg Castle in Bonn, Germany.

In July, 2007 Jurga with her song 5th Season won the Grand Prix of the Baltic Song Festival in Karlshamn, Sweden. Few months later Jurga's success was sealed in Munich with MTV European Music Award for Best Baltic Act. This became the first ever MTV award in Lithuanian popmusic history.

In 2008, the singer achieved her ambition to give a concert together with the Icelandic star Bj&ouml;rk; she was also involved in an impressive project with a pianist, Petras Geniu&scaron;as; released the singles 5th Season and Sandman's Child, the origin of which is related to her travel to Afghanistan and where the videos in Lithunian and English were filmed; she also wrote a book. Jurga has not only became the best singer of the Baltic countries, but also received many other nominations, for her musical contribution as well as for work not related to music.