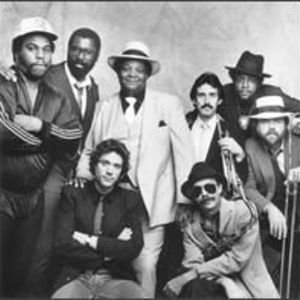 Larry "Big Twist" Nolan was the titular leader of the horn-dominated band, Big Twist and the Mellow Fellows. He got his name from his 6' 4" stature, his weight (often in excess of 300 pounds), and his booming voice. Prior to joining the band in 1970, Twist was living in Carbondale, Illinois and playing drums for a country band. Born in Terre Haute, Indiana in 1937, Twist was a journeyman musician who performed everything from blues to pop in Midwest bar bands.

As their stature increased, Big Twist & The Mellow Fellows moved from small, private fraternity parties to concert stages and blues clubs throughout the country.

Throughout the 1970s, Big Twist and the Mellow Fellows built their repertoire on a blend of soul, R&B, blues and rock. They performed at college fraternity parties, beer halls, and clubs throughout the Midwest. In 1978 the band relocated to Chicago and a year later they recorded their self-titled debut album for the Flying Fish label. Their brand of brassy R&B party music made them favorites among young and old alike.

After a second Flying Fish record, the band moved over to Alligator Records. Their label debut, 1983's Playing For Keeps, enabled the band to break out beyond its regional following and attract national attention. From full-tilt boogie to soul ballads, from swinging, horn-driven dance tunes to downhome blues, Twist's giant voice and supertight band gave life to the classic R&B sound without losing any of the music's great depth.

Twist possessed a mind-boggling vocal range, a distinct style all his own, and a sense of what to put in and, more importantly, what to leave out. Blasting horns, sizzling guitar, and Twist's voice all combined to bring blues, R&B, soul and ballads to clamoring fans with ease, passion and believability.

Unfortunately, Twist suffered from ill health brought on in no small part by his often excessive weight. In 1986 Twist and Alligator released Live From Chicago - Bigger Than Life!!, but Twist's diabetes made it near impossible for him to perform or record with the band. However, songs like Turning Point, Too Much Barbeque and Steamroller Blues gave blues lovers everywhere a huge dose of some serious party music.

After over 20 years of singing some of the toughest R&B in the music business, Big Twist died in 1990. After Twist's death, the band changed its name to the Chicago Rhythm & Blues Kings, and they continue to bring their infectious music to delighted audiences everywhere they play.

Live From Chicago! Bigger Than Life!