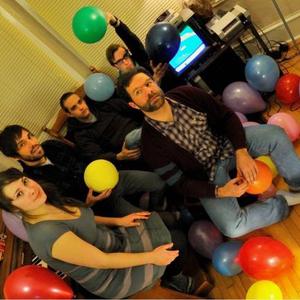 Winnipeg indie pop outfit Boats makes impossibly hooky pop songs about death, being old, girls, glowing bears and escaping the spectral plane of existence and reappearing at a football game ? all of which can be found on the band's sparkling third album, A Fairway Full Of Miners, due out Feb. 5, 2013 via Kill Rock Stars (Corin Tucker Band, Elliott Smith, Decemberists, Deerhoof). Recorded in the spring/summer of 2012 by Ryan McVeigh at Prairie Recording Studios/UMFM and mixed by David Carswell in Vancouver (Destroyer...

Recorded in the spring/summer of 2012 by Ryan McVeigh at Prairie Recording Studios/UMFM and mixed by David Carswell in Vancouver (Destroyer, New Pornographers), A Fairway Full Of Miners comes as the follow-up to Boats' acclaimed 2010 sophomore album, Cannonballs, Cannonballs ? named the No. 1 album of 2010 by Winnipeg college radio station 101.5 UMFM and hailed by critics for its inventiveness and mega-watt charm. But if Cannonballs, Cannonballs was all about giddy exuberance, A Fairway Full Of Miners is about growing up and finding yourself bored. There are still plenty of manic, sloppy-on-purpose junk-store pop tunes that burst with pop-rocks-and-Coke energy (O Telescope), but the new record also sees the band stretch out over more ambitious epics (Animated GIFs) and heartfelt ballads (Advice on Bears). It's eclectic, but not unfocused; the whole thing is unified by frontman/band leader Mat Klachefsky's helium-high yelp of a singing voice.

Maturity has become almost a clich? when it comes to describing albums ? especially third albums ? but A Fairway Full Of Miners has a focus to it that comes with relentless touring (Boats has done eight North American tours) and a sophistication that comes with refining a particular sound over the span of three albums). But don't confuse mature with boring; Boats albums give you that thrilling feeling of being on the verge of spinning wildly, dizzingly out of control.

Look for A Fairway Full Of Miners in early February. A three-song cassette tape will be released this December.

The Ballad Of The Eagle