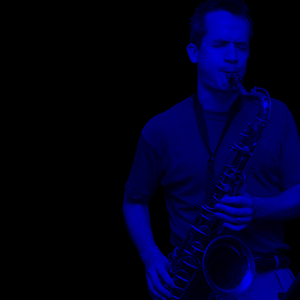 Chris Byars was born in New York City on Nov. 2, 1970 into a family of Juilliard-trained musicians. The artistic resources of NYC were made accessible to the youngster, who soon found himself in musical situations with the top talents of the world. Throughout his childhood, he was granted private study with the great teachers in the area, devoting much effort to learning drums, voice, saxophone, musicianship and ballet technique.

From age 6 to 14, Chris enjoyed a successful career as an opera singer, performing, touring, and appearing on television with the Metropolitan Opera, New York City Opera and New York City Ballet. At age 14 he devoted himself exclusively to the idiom of jazz.

In the next ten years Byars undertook a period of apprenticeship that transformed him from a jazz novice into a fully functioning jazz composer, arranger and multi- instrumentalist. A Bachelor's and Master's Degree were earned from Manhattan School of Music, but perhaps the most impact was gained by 2 years of intensive private study with musicianship guru Helen Jordan.

In 1994 he began a nine-year run of steady engagements at the Greenwich Village ?cutting-edge jazz club? Smalls, appearing on average twice weekly with jazz legends Frank Hewitt and Jimmy Lovelace. This decade of late-night gigs saw the birth of two bands: the quintet Across 7 Street (co-led by bassist Ari Roland) and The Chris Byars Octet. Both have recorded with the indie label Smalls Records to great critical acclaim.

As a small-group leader, Byars released his first offering, Photos in Black, White and Gray (Smalls Records) in March 2007. Byars is heard on alto, tenor and soprano saxophones, performing exclusively original material. Byars toured Russia and Central Asia on behalf of the U.S. Department of State in April/ May 2007. He presented his award-winning educational program ?Basheer's Dream: The Music of Gigi Gryce Returns to the Bronx? with Across 7 Street.

After three summer tours to Russia and Turkmenistan, The Chris Byars Quartet re-configured as a piano-less band, adding John Mosca on trombone. There is a notable shift towards new compositions, challenging counterpoint, increased melodic development and more prominent song structure. The "New" Chris Byars Quartet presented an innovative combination of original music and visual art at the Rubin Museum in October, 2007, premiering the program "Jazz Pictures at an Exhibition of Himalayan Art," ten compositions set to a larger-than-life slideshow, cast on the back wall of this beautiful performance space.

In February 2008, the Chris Byars Quartet launches a 29-day tour to Slovakia, Saudi Arabia, Cyprus, Montenegro, and Slovenia as part of the Rhythm Road: American Music Abroad Program, administered by the United States Department of State and Jazz at Lincoln Center. Please check the links page for the tour's website, updated in real time.

Byars is currently working with jazz legend Teddy Charles, combining the personnel of the Chris Byars quartet with the invigorating energy of a true jazz master. After making a splash with a week at the Village Vanguard (March 2008) and some summer jazz festival appearances, the Quintet will release a CD in September 2008 on Smalls Records. After this, Phase II will begin: the hoisting of the sails of the long-dormant Teddy Charles Tentet, a group that featured Gigi Gryce, Art Farmer, and Jimmy Raney, and the writing of Gil Evans, Bob Brookmeyer, Mal Waldron, George Russell, and of course, Teddy Charles.

Chris Byars lives in the Riverdale section of the Bronx with his very supportive wife, Sarah, and wonderful children Anna (6 years old) and John (2 years old). He loves jazz, baseball, Turkmen carpets, chocolate chip cookies, and all the new research into the brain and behavior patterns, especially where it concerns music!

Photos In Black, White And Gray