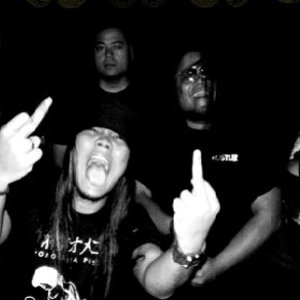 The morbid history of CARDIAC NECROPSY was taken back in the early 1991 where 5 amature fuckboys called themselves INFERNAL SCUM. It started off as a hobby playing some old school thrash music after school hours. By then, a simple hobby turned into a passion for speed, thus the crave for brutality spawned & somewhere in Sep 1991, CARDIAC NECROPSY emerged in the local scene playing Black Death/Grind music.

In 1993, CN released their 1st Black/Death metal tracks in a local compilation entitled THE BIRTH under Masterpiece Prod. Howfuckingever, like any other bands here, CN was unable to continue their brutal perversion due to various commitment issues especially wasting their youth serving the god damn nation.

In the year 2000, being the last man standing, Yuz (Jahanam) reformed CN back, displaying the sickest & twisted line-ups the metal scene has to offer. The line ups - Jananam/vox, Xikfarc/guitar, Xikbastard/bass & Tremor/drum. With the new mentally disturbed line-ups, CN started playing a more brutal grinding materials..Hey ! why not ?! Lets do PORN ! And so, starts the Porngrind journey of the 5 sick MILFs lovers...By the late 2002, CN released 5 whoregrinding tracks in a split cd entitled Splitting the Vulva under a local production, Dark Artz Release. With the release of the split-cd, CN started to get some recognition for the sick music CN is displaying..

The year 2003 was a bitch for CARDIAC NECROPSY which suffered a major reshufflements in the line-ups leaving only Yuz Jahanam & Xikfarc to enter the studio for an upcoming recordings. During the recording, CN used a sessionist to cover the drumtracks & Xikfarc on the bass tracks. CN managed to produce 8 buttfucking in your face materials on the promo. But again howfuckingever, there were some setbacks for the release of the prmo due to the mishandling of the original DATs..hence some songs were not even mastered & the sounds sucks big time...Only by Dec 2006, CN self-released the promo with only 100 limited copies entitled SCUMWHORE SUPERSTAR.

In July 2006, Yuz & Xikfarc re-united CN for the last time recruiting back Xikbastard & Tremor, proving to the underground scene that the passion for playing brutality has always been in the blood. With all the perverted line ups are back, CARDIAC NECROPSY will once again continue to devastate the porn-blast, whoregrinding assault to the listeners.