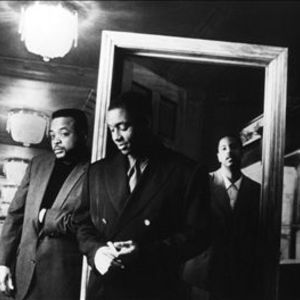 Jeff "Tain" Watts was born on January 20, 1960 in Pittsburgh, PA. He is a jazz drummer. Along with performing with jazz greats such as Wynton Marsalis, Branford Marsalis, Betty Carter, Michael Brecker, and many others (see section below for a nearly complete list of musicians Tain has performed with and selected discography), he has released seven albums under his own name. They are: Family (2011) Watts (2009) Folk's Songs (2007) DeTAINed at the Blue Note (2004)

Jeff ?Tain? Watts holds the unique distinction of being the only musician to appear on every Grammy Award winning jazz record by both Wynton and Branford Marsalis.

Jeff has worked in the film and television industry as both a musician on the Tonight Show with Jay Leno for three years and as an actor, Rhythm Jones in Spike Lee's "Mo Better Blues". Tain currently performs with the Branford Marsalis Quartet, McCoy Tyner, The George Cables Project, Gonzalo Rubalcaba and his own band "Tain & the Ebonix". As a composer, Jeff is a creative and innovative force in modern jazz, contributing most of the compositions on his own albums. Tainish.com is his official website.

Detained At The Blue Note