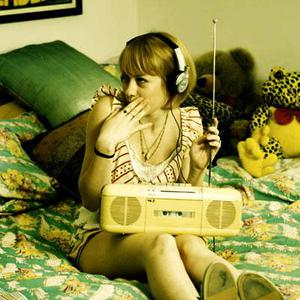 Oh hey there. Welcome to Katie Costello's abridged biography. Katie Costello is physiologically young, mentally ancient, and prides herself in having a keen eye for kitsch. When not "song-doodling," as she has been known to call it, Katie can be found sulking in public libraries, skimming through critically acclaimed tween drama-comedy novels, and/or collecting cute rocks with fun personalities from her hometown Hermosa Beach, or some other rock-abundant natural setting. Katie is recognized by a unique lyrical approach to her vintage-esque original tunes.

Despite her biting sarcasm and unrepentant banter, Katie truly strives to be a sounding voice for the hopelessly warped, while simultaneously promoting the significance and paramount need for genuine creative passion.

Katie's music is on KCRW (89.9 Santa Monica) "Morning Becomes Eclectic" and was chosen as their "KCRW Top Tune of the Day" free iTunes download. Her songs have been featured on the CW shows, "90210," "One Tree Hill," and ABC's "Private Practice." Her debut album, "Kaleidoscope Machine" is available on iTunes & was the iTunes "Indie Artist Spotlight." Her song "Isn't It Lovely" was the grand-prize winner of Sennheiser's "My Song Contest," which also landed her a performance at the 2010 NAMM conference. Paste Magazine recently featured her song "Inside Out" in their "New Music Sampler," alongside The Monsters of Folk and Sufjan Stevens.

Now living in Brooklyn, NY, Katie Costello is attempting (and marginally fulfilling) living the dream. She has just finished her second record with producer Tony Berg (Jesca Hoop, Aimee Mann, Michael Penn, Joey Ryan), to be dubbed "Lamplight." It shall be released at the beginning of 2011. Preview the new tunes by watching Katie's "Launch To Lamplight Series" on YouTube. Keep you eyes and ears peeled for Katie Costello's "Lamplight."