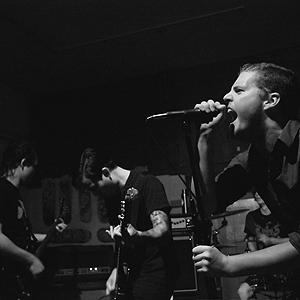 Based out of San Francisco, CA, Deafheaven started as an isolated project between frontman George Clarke and guitarist Kerry McCoy. After sending the demo to various blogs and receiving overwhelmingly positive reception, they accepted offers to play live shows and added members to form the quintet that today tours as Deafheaven. On July 29th, 2010, Deafheaven played their first show, marking the unofficial genesis of their rise to bay area prominence.

Within months of forming, they began receiving interest from numerous record labels and officially signed on with Deathwish Records in December of 2010.

Since signing to Deathwish, Deafheaven has released a limited edition 7" demo, debuted their first full album, Roads to Judah, toured the West Coast; and are currently preparing for a tour of the South West.

Their music is described as "A dizzying hybrid of shoegaze shimmer, hardcore punk passion, emo vulnerability, and black metal intensity." They have cited a wide range of musical influences, including, but not limited to, Morbid Angel, The Smiths, Godspeed You! Black Emperor, Orchid and My Bloody Valentine.