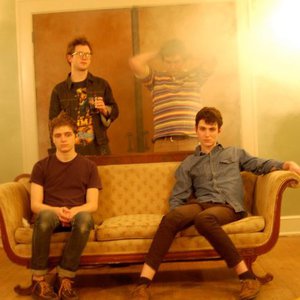 The Balkans were formed in 2008 in the suburbs of Atlanta by Frankie Broyles, Woodbury Shortridge, Stanley Vergilis, and Brett Miller. At the time of formation the members were still in high school, yet they quickly began opening for bands such as King Khan, Jay Reatard, Times New Viking, and Atlas Sound. These early shows were noted for their youthful, frantic energy and also for taking place in clubs that they otherwise would have been too young to get into.

To date the band have released three 7-inch singles through local labels and embarked on several east coast tours which have earned them a considerable amount of blog press from publishers such as Vice, Nu Rave Brainwave, and Creative Loafing. The first single featured an instrumental punk jam (C++) with an atmospheric, shoegazer B-side (F3). It was self-released on home-made vinyl. The Balkans got picked up by Double Phantom Records in 2009, an Atlanta boutique record label that also works with The Selmanaires, Carnivores, and the N.E.C. They released two 7-inch singles on Double Phantom, one entitled Zebra Print and the most recent, Georganne. These releases won a variety of critical acclaim from Creative Loafing, one of which was rated the #1 Atlanta Release of 2009 (a list which included bands such as Deerhunter and the Black Lips), alongside a critic vote of Best New Music act for the same year. The Balkans track Violent Girls, along with songs from other up-and-coming Atlanta bands such as Zoroaster and The Coathangers, was also featured on an Atlanta vinyl compilation released in 2009 by Criminal Records and Creative Loafing.

According to their blog and DoublePhantom.com and Balkans plan to release a new single and debut LP in the US and UK in the spring of 2011.