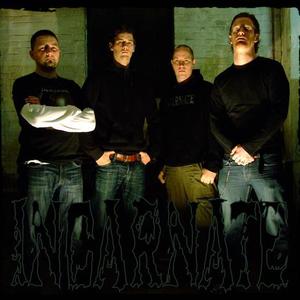 There are several Artists with this Name: 1. INCARNATE, the Dutch metalcore band, was founded in the early fall of 2003. Following no trends, not trying to fit in, INCARNATE's main goal is to deliver uncompromising heavy music. Taking influences from "death/thrash metal", "hardcore" and "metalcore", INCARNATE brings you music with the intensity and power of Heaven Shall Burn, the thrashing riffs of Slayer and the heaviness of Bolt Thrower.

1. INCARNATE, the Dutch metalcore band, was founded in the early fall of 2003. Following no trends, not trying to fit in, INCARNATE's main goal is to deliver uncompromising heavy music. Taking influences from "death/thrash metal", "hardcore" and "metalcore", INCARNATE brings you music with the intensity and power of Heaven Shall Burn, the thrashing riffs of Slayer and the heaviness of Bolt Thrower.

INCARNATE self-released their debut MCD "A dark age of lies" in the fall of 2004. One year later, INCARNATE signs a deal with German record label Lucifer's Legions Records for the international re-release of ?A dark age of lies?. The album is accompanied by the release of the first official INCARNATE video-clip, which features the song Stronghold.

May 2006, INCARNATE record the Integrity song ?Tempest?. The song appears in February 2007 on the Integrity Tribute CD: Harder they Fall, released by Escapist Records (USA). This awesome album features contributions from hardcore bands from all over the world and artwork by Raf Wechterowicz (Trivium, Ringworm, Iron Maiden, Soulfly).

No time wasted, August 2007 INCARNATE again hits the studio for the recording of their debut full-length "Embrace the Horror". An album full of fast riffs, aggressive breakdowns, and heavy grooves combined with lyrics dealing with personal frustrations, apocalyptic visions and criticism towards humanity. In addition, the album features a vocal contribution and artwork by Dwid Hellion (Integrity). ?Embrace the Horror? hits the streets in February 2008 through Germany based record label Demons Run Amok Entertainment.
In the summer of 2010, INCARNATE record their third album, entitled ?Hands of Guilt / Eyes of Greed?. This record has a great thrash and death metal feel to it, but the groove and slower tempos are represented. INCARNATE worked together with Jacob Parmentier - an upcoming artist known for his black and white horror-esque style of drawing - to visualize the album's concept. He did an awesome job on the cover artwork, which now perfectly fits to the music.

For the release of "Hands of Guilt / Eyes of Greed", the band officially resigned a deal with Demons Run Amok. The album will be released on the 4th of March 2011.

3. The story of the original Incarnate began in the year 1999. Lasse L?ytynoja, drummer and passionate fan of Death Metal, decided to form a project to express own ideas and song writing. L?ytynoja recruited his friends Jussi Yli-Korpela to play guitar and Markus Tavasti to help with the vocals. At those times they worked in the garage and recorded some demos but profile was kept low...
It took several years before things really started rolling. L?ytynoja met guitarist Juha Kellokoski and they moved to better training facilities in the central of Kannus. After many jamming sessions in the late 2002, spawned the vision to create a solid and unstoppable band. They started to write devastating material and practice with obsession. After several months Jukka Kiviniemi joined Incarnate to play bass, adding his great experience. Soon it became clear that Yli-Korpela had no longer time to keep up with the band's schedule and was replaced by guitarist Kalle Niskala. Tavasti completed the line-up as a full-time vocalist.
The first published record "Deathsigns", medley of merciless thrash-beat and high speed riffing, received good feedback in many reviews. At those times ways departed with Niskala and Incarnate felt it was best to continue as a death-quartet. The band worked hard to hammer new songs and after many delays, the second demo "Expectations of Exhumation" was released. No doubt, this record took a major step in evolution with greater dynamics and variation, still keeping the old school aggression. ?Expectations of Exhumation? received great reviews around the world.
During the year 2005 band wrote new material and entered Coffin-Studios to record self-financed EP titled ?Exist to Extinct?. New recording is the most massive so far. It contains seven new songs and one re-recording from DeathSigns ?demo. ?Exist to Extinct? is released in the summer 2006.
The uncompromising music of Incarnate combines the elements of extreme Thrash- and Death Metal. Some influences are drawn from classic acts like Kreator, Slayer and Death, mixed with the fiery rage.
NOTE: There are few other bands with similar name, but this Finnish death/thrash band's homepage can be found here: www.mikseri.net/Incarnate.

Incarnate the New Zealand thrash metal band formed in late 2005 with one goal in mind... ...Heavy Metal! Incarnate burst onto the local circuit in January 2006 and have since made a name for themselves by leaving a trail of chaos and carnage after every gig they play. The Incarnate sound combines the lead guitar skills of Mike Mitchell and Daniel Shea, the technical bass lines of Brendon Mchattie, the blazing double kicking skills of Hamish Gavin and is all topped off by Daniel's raw powerful unique and catchy vocal lines. Incarnate released a successful self-produced demo entitled "Mosgiel Metal" in 2006 but in 2007 with the release of their debut EP "Necessary Evil" only weeks away expect Incarnate to explode back on the live music scene with the intention of Global Domination.
The website for the thrash metal Incarnate can be found at www.myspace.com/incarnatenz

Hands Of Guilt Eyes Of Greed