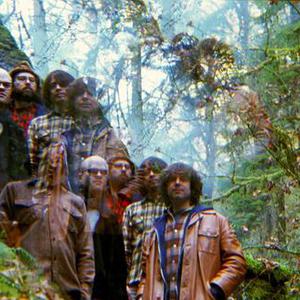 Eternal Tapestry started in the fall of 2005, conceived after original members Nick Bindeman and Dewey Mahood discovered their mutual love of Sonny Sharrock and Neu! It was these two vastly different artists who helped the band's sound take shape, free improvised guitar with structured rhythms and lots of layered ambient sound. They asked a few friends to join them in the band and so it began. Nick's younger brother Jed moved to Portland, Oregon in the summer of 2006 and joined shortly afterwards.

At this time both Nick and Jed were playing drums as part of a six piece band, making very chaotic and dark psychedelic music. A few members came and went around this time, leaving the core trio of Nick, Dewey and Jed to continue on their own. Most of the limited edition LPs released to date document this trio. In 2009 Ryan Carlile joined the band on saxophone and synth, and just in the last year Krag Likins joined as bassist, completing the current line up. The members of Eternal Tapestry are extremely active in the experimental underground. Nick explores minimal synth music as Tunnels, with an album to come on Troubleman Unlimited in 2011. In addition Nick plays guitar in the psychedelic/improv group Jackie-O Motherfucker. Dewey has recorded solo bliss out music as Plankton Wat since 2002, and explores the outer realms of dub as Edibles. Jed has played in the bi-coastal drone/rock band Heavy Winged since 2004 and has released many records with the band over the years, with the latest being a release on Type Records. He also joined Jackie-O Motherfucker as their drummer at the beginning of 2010, and plays in the minimalist/techno project Operative. Ryan plays as one half of the electronic/drone duo Cloaks. Jed and Dewey also collaborate with Barn Owl as the group Garden Sound, whose debut album came out this fall on the Digitalis label.

On their Thrill Jockey debut Eternal Tapestry have delivered an album not unlike their epic live shows. [album]Beyond the 4th Door[/album] contains long stretches of melodic guitar improvisations, dark brooding songs that slowly build and expand to allow in layers of light. The album was recorded in their home studio and was created by recording more that two hours of material, mostly live, and hand picking what you hold in your hands. There is a free and open nature to their structure creating for the listener a spacious environment to explore. Harkening back to the early 70's experimental rock that inspired them, such as Popol Vuh, Cluster and Trad Gras Och Stenar, Beyond the 4th Door is an album meant to be listened to in its entirety. There is no single, no easy sound bite. It is not a record made for the pop world ? it is a record made despite it. The brooding psych rock builds from the contemplative, atmospheric opener of "Ancient Echos" through to the heavy epic "Galactic Derelict", taking the listener way out and then gently calling them back with the reprise of Nick's ghostly vocals on "Reflections in a Mirage". The album finishes with a hint of light in the delicate guitar and bass interplay, floating on the ambient waves created by the open cymbal and horn work of "Time Winds Through a Glass, Cleary".

Eternal Tapestry are in every way musicians of the now. Extremely active in the new underground of cassettes and CD-Rs, releasing limited edition carefully designed albums on the premier purveyors of the counterculture. Turning the warehouse show on its head by making it a mini-festival of like-minded musicians whose shows are very much a unique event as opposed to an attempt to sell or recreate a record. What is old is what is new, the openness of the 70's comes back to thrive well beyond the parameters of Pitchfork and the like. We invite you to explore the world, Beyond the 4th Door.

A World Out Of Time

Beyond The 4Th Door

Palace Of The Night Skies