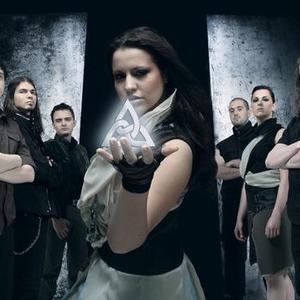 The band APERION (from Slovenia) was given birth on 1st November 2002 on the foundations of the former band XANTHOCHROID. Only the guitar player and flutist remained in Aperion. At this turning point the music genre changed from grunge with classical instruments (violin and flute) to rock with the same classical parts. Now in the band were next instruments: guitar, bass, violin, flute, drums and woman vocal. Their music was described as rock foundation with ornaments of all musical styles. After two years due to different problems and disagreements, the band changed.

In two months the seating of the band was totally different. Only the guitarist an bassist remained of the "old" band. In the year 2004 also the instruments changed. Now the violin was replaced by viola, the cello and didgeridoo is added, and also the flutist, drumer and singer changed. From then on their music is developing in new dimensions, dimensions, which lead them to unknown world. World of music and APERION.

Aperion as a group introduces the diversity in use of stringed and symphonic instruments next to standard rock combo line-up. Despite the hard rock or even metal base the intriguing sounds of flute, viola and cello with help of dramatic didgeridoo and spinto soprano leading vocalist manage to curve the edges and make the music sound very theatrical.

After years of gaining experience in live performance the 8 members cast decided to release their first album. In search of the balance between classical harmonies and roughness of new age sounds, the thoughts of eternal battle between right and wrong were released in form of an album ?Act of Hybris' in 2010.