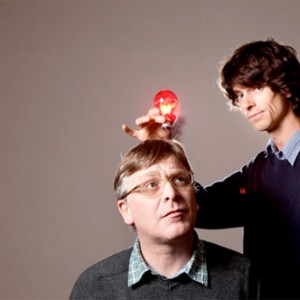 1) Duo formed by Euros Childs and Teenage Fanclub's Norman Blake. The self-titled, co-written album will be released on 31st January on Alsatian Records (Turnstile) preceded by single Candyfloss on the 17th January. Inter-twining the musical DNA of two of Britain's most gifted songwriters, Jonny's debut album proclaims the advent of an irresistibly infectious new strain of psychedelic pop. To kick things off, Jonny are giving away a free, four-track download EP of non-album songs from today (Monday 1st November).

Inter-twining the musical DNA of two of Britain's most gifted songwriters, Jonny's debut album proclaims the advent of an irresistibly infectious new strain of psychedelic pop. To kick things off, Jonny are giving away a free, four-track download EP of non-album songs from today (Monday 1st November).

2) Jonny are a band from Nagoya, Japan that started life as a Weezer covers band but quickly built up a solid catalogue of original songs. They self-released a mini-album called Jonny which they followed up with the double-A side Unclefucker / Radio. The unfortunately titled Unclefucker contains one of the catchiest riffs ever to come out of a Fender and is still a live favourite, inciting bouncing and dancing in all.
Their first full-length album, also called Jonny, (available on itunes) features re-recorded versions of the double-A side (proper studio with a proper budget). Stand out tracks include Where Is The Line? (also re-recorded, this time from the mini-album) and the beautiful This Is Not The Last Song. The album fleshes out the bands pop-punk sound, combining a startling energy with structurally interesting writing and an ear for the catchy melody. Mio Sato's raw voice is a refreshing change from the Mariah Carey wannabes that clog up the charts and Naoki Shinoda's riffs have an energy and soul that is lacking from the fashionably-skilled guitarists performing in live houses all over Japan.
Next came the Pop Star / Cranberry EP. Not really an EP, it contains the aforementioned two songs, a track called Overture which is basically a short, drunk, a cappello sing-a-long of Pop Star and a spoken word track called A Letter. Cranberry is a bit of a departure for the band ? a slow, rambling number, almost grunge-like that marks a new maturity in the band and an interesting glimpse into a future direction. This too has become a live favourite. Pop Star meanwhile is Jonny song-writing at its best ? loud scratchy guitars, a fast, bouncy tempo, a shouty chorus (?I need, I need your electric guitar?) and gained the band their first overseas recognition after Tom Robinson played it on his BBC 6music Introducing show in July 2008.
Good Hour was featured on the OkPowerpop2 compilation and the band closed 2008 by re-releasing their debut mini-album, this time entitled Cake Album, with new song Confession Of My Liberation.
www.myspace.com/jonnyjapan