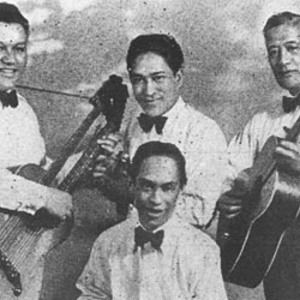 Virtuosic instrumentation and smooth vocal harmonies made Kalama's Quartet one of Hawaii's greatest pre-World War II bands. Led by Honolulu-born saxophonist-turned-steel guitarist Mike Hanapi (1898-1959), the group laid the foundation for all subsequent slack key guitar groups. Hanapi's earliest musical experiences came as a jazz saxophonist. Together with his brother, he performed at the Chicago Exposition in 1910.

According to legend, he first encountered the slack key approach to steel guitar while in Chicago. Before returning to Hawaii, Hanapi spent an extended period in New York. In addition to receiving vocal training at the New York Conservatory of Music, he performed with the Paul Specht Orchestra.

The roots that grew into Kalama's Quartet were planted by a trio that Hanapi formed in 1926 with ukulele player William Kalama and harp-guitarist Bob Nawahine. This group recorded several singles as the Hanapi Trio. With the addition of guitarist/vocalist Dave Kaleipua Munson, in late 1927, the group became Kalama's Quartet. Although a second steel guitarist, Bob Matsu, joined in 1928, the name was not changed.

Kalama's Quartet became known for their silken vocal harmonies. With Hanapi alternating between tenor and falsetto, the harmonies were flushed out by Kalama on tenor, Munson on baritone, and Nawahine on bass. The group remained together for a short period. After recording several tunes for OKeh between 1927 and 1931, they completed their recording career with four tracks recorded for Victor in January 1932.

Following the disbanding of the group, Kalama, Nawahine, Munson, and Matsu faded into obscurity. After recording a disc under his own name, Hanapi opened a musical instruction school in Hawaii in 1938. Two years later, he joined the Royal Hawaiian Band, for whom he played first saxophone until his death in 1959. ~ Craig Harris, All Music Guide